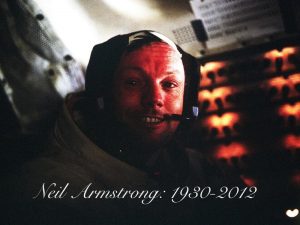 Neil Armstrong during the Apollo 11 mission to the Moon (Credits: NASA)

The passing of Neil Armstrong is arguably the end of an era.  Forty-three years ago, when Armstrong stepped on the Moon he ushered in the end of the great space race between the United States and the Soviet Union and opened the door unwittingly to his own fame and place in history.

It was that fame and celebrity that prompted him to shy away from the public eye, but to continue his life of achievement in spite of  it.  While many would continue to relive that glorious achievement and long for those days of glory, Armstrong persevered forward and demonstrated that there is life after great accomplishment and that living a purposeful life everyday is more rewarding than doing extraordinary things every so often.

More so, he showed us that true greatness is not rooted in our achievements but rather what perspective we put on those achievements.  In Armstrong’s case, a life full of achievement was enjoyed with humility and quiet reflection instead of bravado and self-glorification.

Ironically, in the last chapter of his authorized biography First Man, Armstrong recognized that the time was ripe for people to know who he was in spite of his unwitting status as a hero.  For that we can be grateful for this man whose unquestionable achievements left not only the indelible images from forty-three years ago, but a historical volume of a reluctant hero.  So, as we move forward one small step at a time, Neil Alden Armstrong’s name and legacy leaps into history not only for his great achievement in manned spaceflight but also for the man that he presented to the United States and the world.