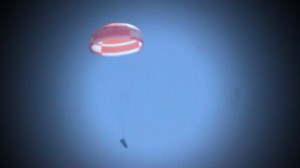 The full-scale prototype of IXV is slowed down by the parachute after being released from an altitude of 3000 m  (Credits: ESA).

The European Space Agency (ESA) has performed a descent and landing test of a full-scale Intermediate eXperimental Vehicle (IXV), on June 19. IXV is an experimental re-entry vehicle, built by Thales Alenia, with a wingless  lifting body arrangement using movable flaps for control.

“The IXV project is developing and flight-testing the technologies and systems for Europe’s future autonomous atmospheric re-entry vehicles,” reported an ESA press release.

The drop test was carried out at the military range at Salto di Quirra, off the east coast of Sardinia in Italy. The full-scale prototype, assembled by the Italian Center of Aerospace Research (CIRA), was released from an altitude of 3000 m by an Italian Air Force helicopter. The free fall provided enough speed to simulate the re-entry from a space mission. The multistage supersonic parachute deployment, qualified at the Yuma Proving Ground in Arizona, slowed IXV for a safe splashdown in the Mediterranean Sea, at a speed below 7 m/s. The test highlighted an anomaly in inflating the floatation balloons that still needs to be further investigated. The vehicle was then recovered from the sea for inspection and analysis on the mainland.

This was the last step in a series of tests to certify that IXV can be safely recovered after a space mission. In previous tests, a smaller prototype was released at various angles and speeds to define the best configuration for minimum water impact loads. IXV is scheduled to be launched on top of a Vega rocket into a suborbital path, in summer 2014. While re-entering the atmosphere at 7,5 km/s, it will test the advanced control system and the thermal protection in supersonic and hypersonic flight. IXV is supposed to separate from Vega launcher at an altitude of 320 km, reaching an apogee of 420 km. The mission will last an hour and a half, ending with a splashdown into the ocean.

The drop test confirmed the technical direction, suggesting also further improvements to be developed by May 2014, when IXV is supposed to be delivered to ESA.