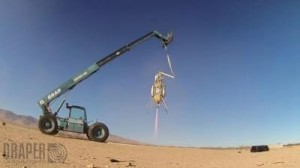 The Xombie suborbital rocket built by Masten Space Systems, an aerospace startup company based in Mojave, California, has succeeded in performing a closed loop tethered flight using a technology developed by Draper Laboratory.

The Guidance Embedded Navigator Integration Environment System, nicknamed the GENIE, enables control of the flight and mimics a final approach of the spacecraft to the surface of Mars or Moon. NASA’s aim is to utilize this system for testing payloads on Earth under realistic flight condition before an actual space mission takes place. Aircraft that provide testing of space instruments today are not capable of flying at the trajectories that would simulate planetary landing. Scientists currently use computer modeling technology for generating this necessary data. However, thanks to the Draper Laboratory invention, it will be possible to test fly emerging and advancing space technologies on Earth, increasing their Technology Readiness Level and advancing their flight readiness. Such testing  would lead to fewer failures occurring during actual spaceflight. Draper Laboratory plans to test the technology in a free flight later during this winter. 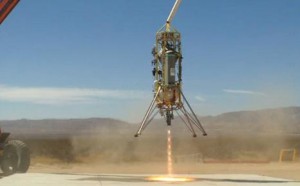 Draper Laboratory is a not-for-profit engineering research and development organization that aims to solve critical American national problems in security, space systems, biomedicine and energy. Navigation and guidance are among the organization’s foremost specializations. The precision landing system was developed together with NASA Johnson Space Center.

Masten Space System, winner of the second prize in a Lunar Lander Challenge in 2009, is developing a line of vertical take-off vertical landing spacecraft initially for unmanned suborbital space-flight. The company’s goal is to later improve the technology to support unmanned orbital launches. The first generation of the Xombie Rocket was retired after a failure during a tethered test flight.

The video below shows the tethered test flight of GENIE technology and a Masten Xombie rocket.