As China plans to build the Chinese Space Station in Low Earth Orbit around 2020, Chinese researchers are busy developing a new generation of technologies to support long term human survival in space. A small but important step forward was made during the 17 days long November flight of Shenzhou VIII spacecraft. The results were recently made public. 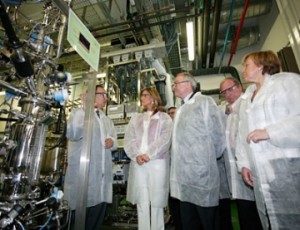 Among the payload was an unusual container carrying a special microgravity experiment. Inside a vessel filled with nutrient solution and two types of algae was a trio of snail astronauts belonging to the Bulinus australianus genus. This small tropical freshwater snail weighs only 0.1 grams and has very modest needs when it comes to oxygen consumption. That’s the reason why it was chosen to travel to space and prove whether it can survive with a miniature Closed Loop Life Support System.  Unfortunately after the landing only one of the “snailtronauts” was found alive.

According to Liu Yongding, a professor at the Chinese Academy of Sciences and designer of the experiment, in the miniature ecosystem algae were the producers providing oxygen and food, snails were the consumers and microbes carried by the snails were helping the decomposing process. Fish were initially considered for the experiment but as professor Liu Yongding explains, snails present a more suitable option: “Snails are better equipped to survive in the harsh environment and they take up only a small area,” he said. 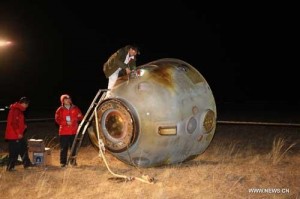 Aboard the Shenzhou-8 capsule after reentry was one surviving snail in a algae-based life support system (Credits: Xinhua/Li Gang)..

One of the types of algae used in the experiment was provided by German scientists. Immediately after the landing the Chinese researchers killed the surviving “snailtronaut” in order to preserve its tissues in a state directly affected by microgravity.

The Chinese scientists believe that algae are the way for providing oxygen and food in future manned space missions to Mars and beyond. According to Chinese media, in the laboratories of Chinese Academy of Sciences they managed to develop a system that makes 1.5 cubic meters of algae produce enough oxygen for a man weighing 70 kilograms for one day. In the future the experiments should determine how much the microgravity can influence the whole system.

The following video explains the principles of bioregenerative life support systems and why the world space life science community sees them as the way forward.
[youtube http://www.youtube.com/watch?v=Q128I9KNY9k]