Zero Gravity Solutions Inc (ZGSI), a Florida based company, is performing microgravity experiments to modify a plant named jatropha curcas to grow in a cooler environment than its natural habitat in the tropics of Central and South America. Jatropha curcas’ seed contains oil which can be used to produce high quality biofuel. 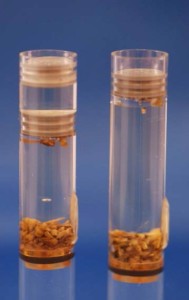 Jatropha cells preserved in fixative prior to landing (Credits: ZGSI).

The company plans that with genetic modification, the plants may be grown in environments such as West Texas. “West Texas is an ideal location due to existing oil and gas industry and it has huge amount of scrubland which can be utilized to grow plants,” said Mr. Richard Godwin, CEO of the company.

When you put any living cell in a microgravity environment which it has never experienced before, it turns on a survival mechanism and starts to express old genes that have been dormant for millions of years. When we asked Godwin if this process has any negative effects (activating unwanted genes, for instance), he said, “Most of them turn on both up and down expression, so some of the expression is not good. In the process of genotyping the data you can identify which genes are the ones you want, and there are ways to promote those genes that you want and suppress the ones you don’t want.”

“With jetropha we have identified about 55 cold resistant genes which are very important in the process of creating jetropha to grow in a cold environment,” explained Mr. Godwin. “So the platform of microgravity is very unique and important to us.”

ZGSI’s founders and scientists have long seen the promise of microgravity, but interest in its application for modification of jatropha was sparked by a Florida based private sponsor who has been keeping an eye on the berry’s potential. Once they began investigated, ZGSI discovered that properly farmed jatropha could have an amazing economic impact. In fact, its berries could be used to produce very high quality jet fuel. “The yield that they have been getting in Mexico and Brazil is 5 tons of jet fuel per hectare if planted properly,” said Godwin. “That is 500 – 600% more yield than corn or switch grass.”

ISS has been serving as a great microgravity experiment platform, but isn’t being utilized to its full capacity. When we asked Godwin why more companies are not getting involved in microgravity experiments, he told us, “Companies aren’t aware how available ISS is for microgravity research. Many companies are not aware about the kind of research they can conduct in microgravity, which can’t be done on 1g gravity on Earth.” They may not have been aware in the past, but if ZGSI’s project comes to fruition, they may learn in a hurry. ZGSI has now successfully completed a series of experiments on jatropha, and has proven the concept of gene activation of plants in microgravity.  At the moment, however, there are no plans to go commercial with modified jatropha. ZGSI will now be working more with annual cash crops, such as rice, as opposed to perennial crops, such as jatropha, The company has plans to elicit a rice variant able to grow in brackish water.