The Space Exploration Project Group (SEPG), of the Space Generation Advisory Council (SGAC) in support of the United Nations Programme on Space Applications,  will conduct an analogue simulation of a human-robotic Mars exploration mission from March 19 to April 1 2017 in southern Poland.

In this two-week mission, a crew of six analogue astronauts will conduct scientific research and record their experiences while confined to a newly built habitat, the M.A.R.S. Laboratory near Rzepiennik Biskupi, Poland, to simulate real planetary exploration conditions. The astronauts’ only communication with the outside world will be through a time-delayed link with the 30 international students and young professionals making up the Flight Support Team (FST), in the PMAS 2017 Mission Support Centre (MSC), located in the offices of ABM Space in Torun, Poland.

The Poland Mars Analogue Simulation 2017 (PMAS 2017) will also include a 3-day lunar simulation in partnership with ESA, in accordance with ESA’s plans of returning to the Moon, before heading on to Mars. The idea of ESA is to first send humans back to the Moon and build a base there, to allow scientific research and to serve as a testbed for future Mars exploration.

“The advantage of the Moon,” Sebastian Hettrich, PMAS 2017 Mission Director, explains, “is that it a) is close enough to Earth to enable a quick return of the astronauts within only a few days at any time of the year and b) there is almost no delay in the communications. These two factors are what makes a Mars mission more difficult and risky, and we first need to learn again how to walk before we can start to run and jump.”

For the PMAS 2017 mission, this means that in the first three days of the mission, there will be no time delay in communications and that experiments conducted will be submitted and supervised by lunar scientists. After these three days, a time delay of 15 minutes will be instituted for all communications between the Mission Support Center and the analogue astronauts, which will drastically cut the amount of guidance that the Mission Support Centre can give the analogue astronauts, forcing the astronauts to function much more autonomously.

It’s a mission with big goals. “PMAS 2017 hopes to find answers to some of the most fundamental question in human history. Are we alone? Can human beings live beyond Earth? And can the Moon or Mars ever support life as we know it?” says  Mina Takla, PMAS Media and Outreach Coordinator.

Beyond addressing the big questions, PMAS 2017 has a range of more immediate scientific goals. A big part of the mission will be conducting research, on topics including human-robotic interaction, field work operations, the psychological effects of isolation, plant growth on simulated Martian soil, and telescope-based astronomy.

But can a simulation like this one really help us get to Mars? Yes, says Reinhard Tlustos, the PMAS 2017 Flight Director.“The process is twofold: on the one hand the scientific results of our experiments will help us gain knowledge and work out problems of a human Mars mission before we start going there. We can’t leap to Mars, we need to go to Mars one small step at a time. The other aspect is public awareness and engagement. Through an analogue mission such as PMAS, we can generate excitement for space research. In the end, the more people are interested in a project, the more likely it is to become reality.”

Hettrich agrees: “Analogue Missions in general are good and low cost opportunities to test and study certain aspects of a long-term space exploration mission, such as a Mars mission. They help us understand and address potential risks and issues that the future Mars astronauts will have to face, and therefore, can make such missions much safer and scientifically more efficient.”

In addition to its concrete scientific goals, PMAS 2017 is on a mission to inspire. A key aim of the mission is to engage the public with the excitement of space exploration. The mission will include a variety of outreach activities, including competitions, citizen science projects, and public events, and will feature in a professional documentary that will give a behind-the-scenes look at the day-to-day operations and challenges of space exploration. “I hope to share this story with the rest of the world, and aim to spread the enthusiasm about space exploration to everyone. There should be no boundaries” says Candice Goodwin, the PMAS 2017 Media and Outreach Coordinator.

PMAS 2017 also hopes to demonstrate the importance of international, interdisciplinary, and multicultural collaborations in space exploration. It will be the most international analogue mission ever conducted.“PMAS 2017 represents planet Earth, it represents humanity. Our team members come from every habitable continent and from over 30 countries around the globe. There are no boundaries in space! PMAS will certainly help us understand and tackle issues arising from deep-space exploration, but most importantly, it will help us change how we think about humanity and about human space exploration,” points out Takla.

But to make all this happen, PMAS 2017 needs help and support. All PMAS 2017 team members are volunteers, many are students, and the funds raised so far do not yet cover all mission costs. PMAS 2017 is running a crowdfunding campaign on Indiegogo, beginning on October 15, to collect the necessary funds. All donations will go directly to advancing space exploration research and promoting space education on a global scale. 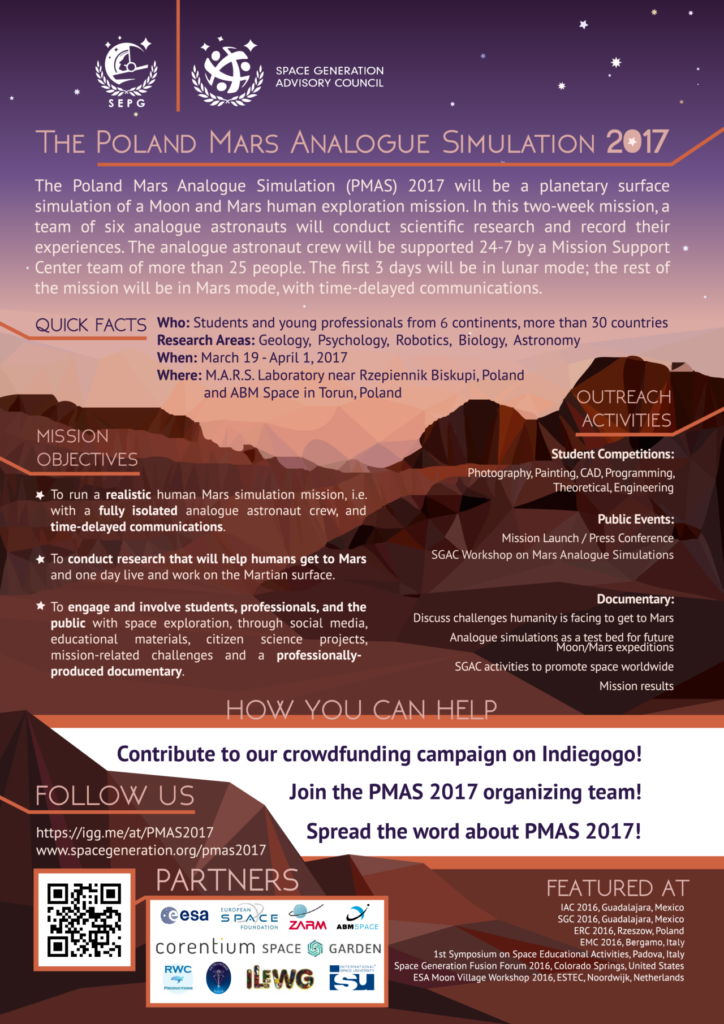