Space Safety Magazine (SSM) is a quarterly print magazine and a daily news website,  jointly published by the International Association for Advancement of Space Safety (IAASS) and the International Space Safety Foundation (ISSF). Space Safety Magazine is focused on safety related issues affecting space as well as safety on Earth from space events and objects. We regularly follows activities and threats in space debris and situational awareness, space weather and radiation impacts, nuclear safety, human spaceflight, launches, and reentries. SSM is highly international in nature, reporting on developments from around the globe, distributing content on multiple continents, and featuring an international staff.

We believe that ensuring safety is not just a moral duty but a prerequisite for space utilization to continue to progress and evolve. We cover both manned and unmanned spaceflight, considering risks to human life across all mission phases, not just crews on board but spacecraft manufacturers and operators, technicians at the launch pad, and ultimately, the general public. The latter is particularly significant because while astronauts know they are running some risk from space operations, ordinary people generally do not, at least not until high-profile satellite re-entries make headlines.

At the same time, we seek to give a fuller picture of how risk is managed in the space industry, and why these risks are run in the first place – not just because “launching stuff in space is cool,” but because of the practical benefits that result from space endeavours, like Earth observation and satellite navigation, which actually enhance safety down here on Earth. For instance, if satellite navigation were to be compromised, air traffic safety would be greatly endangered. That is why we also deal with how to keep space assets secure.

SSM was founded in 2011 by current Editor-in-Chief Andrea Gini. The magazine was an offshoot of a newsletter published by SSM sponsor IAASS.  The pilot issue of the magazine was published in the summer of 2011 and distributed to a select audience. The website went live in August 2011, on the occasion of the failure of Progress M12-M. In October 2011, the Magazine acquired its first regular contributors, expanding the breadth of the topics covered.  Over the first year of activities, the website achieved nearly 30,000 monthly visits worldwide and the magazine a distribution of about 2000 copies, in both print and electronic format. 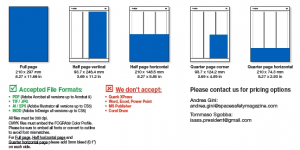 Full, half, and quarter page advertisements are available for purchase. We additionally have available sponsorships, in which you promote your company or organization by developing an 8 page special report or infomercial, in concert with our staff and targeted towards a particular venue. Space Safety Magazine has worked with organizations such as IAASS, ISSF, Kaiser Italia, the International Space University, and Secure World Foundation, reaching events such as the IAASS International Conference, the ISU Symposium, the ISS and Mars Conference, TEDx, and the International Astronautical Congress.

Standard advertisement rates for print and website are identified below.

SSM is always interested in contributions. Think you have a suitable article, photograph, cartoon, or video? Let us know! Contact info@spacesafetymagazine.com.

SSM is always interested in speaking with potential staff writers, editors, and business managers. Whether you are an experienced scientific journalist or looking to put your education to work for the first time, we want to hear from you!

SSM is geared towards space professionals but written to be accessible to all readers. SSM welcomes web articles and editorials of about 600 words and print articles of 600-1200 words. All submissions must be original material unless properly credited and with permission of the copyright holder.

Andrea Gini is a scientific journalist and a professional of the space industry, working as a contractor on ISS Payload Safety. He is the Editor-in-chief of the Space Safety Magazine. Andrea is also Chairman of the Information and Communication Committee of the International Association for Advancement in Space Safety (IAASS), publisher of the Space Safety Magazine, and he is responsible for the communication strategy of the association. Andrea holds a BSc and MSc in computer science from the University of Milano, a Masters in scientific journalism from the International School for Advanced Studies of Trieste, and a MSc in Space Studies from the International Space University. Andrea can be reached at andrea.gini@spacesafetymagazine.com.

After three years as Space Safety Magazine’s Managing Editor, Merryl semi-retired to Visiting Contributor and manager of the campaign to bring the International Space Station collaboration to the attention of the Nobel Peace Prize committee. A Chemical Engineer and graduate of the International Space University with a Masters in Space Studies, Merryl is committed to the advancement of human exploration and utilization of space resources. Merryl can be reached at merryl.azriel@spacesafetymagazine.com.

Matteo Emanuelli is a young professional from Italy but living in the Netherlands. He is member of the Space Generation Advisory Council where he is studying the feasbility of an active space debris removal system. Matteo also worked on a space debris removal mission at the Omsk State Technical University in Russia while he was enrolled at Politecnico di Milano. 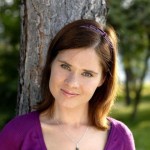 Tereza Pultarova is a science journalist and education TV documentary maker from the Czech Republic. After finishing a Bc in journalism she worked for six years in Czech Public Service Broadcast Television first as an editor, later as a presenter, scriptwriter, and director of science and education programs. Tereza also has a degree in cultural anthropology. She is an alumna of  the International Space University, where she obtained a Masters degree in space management.

Michael is an attorney with a focus on counseling governmental and non-governmental organizations on issues relating to domestic and international space law and policy, including issues surrounding space debris.  Michael is a member of the New Hampshire Bar and a member of the International Institute of Space Law.  Michael can be contacted at michael.listner@spacesafetymagazine.com.  Follow Michael on Twitter @ponder68.

Kristhian Mason is Space Safety Magazine’s Creative Director. Kristhian is a professional graphic designer with longstanding experience in video editing, digital recording, and 3D modeling. Kristhian is a multi-talented artist, with a passion for space that dates back to his childhood. He holds primary responsibility for SSM’s graphic design and layout.

Caitlin DeLatte is currently a sophomore at the University of Maryland. She is pursuing undergraduate degrees in Computer Science and Vocal Performance. Caitlin serves as Space Safety Magazine’s Copy Editor for both online and print articles.

Carmen Felix is a Mexican space professional with a Masters in Space Science from the International Space University in Strasbourg, France, and a BS in Electronics and Communications from the Instituto Tecnologico y de Estudios Superiores de Monterrey in Monterrey, Mexico. She is the National Point of Contact in Mexico for Space Generation. Carmen is passionate about space exploration and human spaceflight. She has experience in telecommunication, satellite technology and space analogs.

Holding a BS degree in mechanical engineering and a MSc in engineering management, Göktuğ is now a MSc. student at the International Space University, France.

Terry Hardy founded and leads efforts in system safety, software safety, and emergency management at Great Circle Analytics. Mr. Hardy has over 30 years of engineering experience and has performed engineering, safety, emergency management, and risk management activities for a number of commercial and government organizations including NASA and the U.S. Federal Aviation Administration. Mr. Hardy has created a web site, www.systemsafetyskeptic.com, to provide lessons learned in system safety, and he is author of several books on system safety including “The System Safety Skeptic: Lessons Learned in Safety Management and Engineering” and “Software and System Safety: Accidents, Incidents, and Lessons Learned.”

Nikita is a London-based recent graduate of the International Space University’s Space Studies Masters and Summer Program. With a Bachelors degree in Biological Sciences from the University of Birmingham, her interests lie in the progression of human spaceflight, creative communication, social media and scientific research in space. Nikita is an enthusiastic science communicator and enjoys travelling and updating her blog at: http://makingapplepiefromscratch.blogspot.co.uk/. 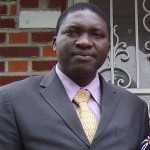 Siddharth Raval has recently completed undergraduate studies in Aeronautical Engineering. He is currently associated with Space Safety and Sustainability Working Group at SGAC, where he and his team is working on Space Debris Removal mission design. He is also associated with Yuri’s Night in  Global Executive Team. His interest lies in the area of CFD, Aerodynamics, Space Debris.

Ralf is an astrophotographer and independent journalist specializing in high resolution imaging of spacecraft in orbit. He has captured ground-views of the last construction years of the ISS and taken the first ever ground-based image of astronauts during EVA. His sub-specialization is currently visualization of rotational/tumbling behave of decommissioned satellites and debris/space junk. He writes for various newspapers and magazines about space science and technology.

Leonard David is an American space journalist and a senior research associate with the Colorado-based Secure World Foundation. He is a winner of last year’s National Space Club Press Award. His articles can be seen at SPACE.com, AIAA Aerospace America, and now as contributor to Space Safety Magazine.

Gilles is Principal Mechanical Engineer of the Aeolus satellite at the European Space Agency. His previous baby was Envisat. He has always been a satellite mechanical engineer. However, in 1994, there were things to say that could not be easily told. The two first cartoons were pinned in the corridor and had some success. Thousands of cartoons later, the man spends his meetings drawing more cartoons. To see more, check out his blog: http://gilscow.wordpress.com/