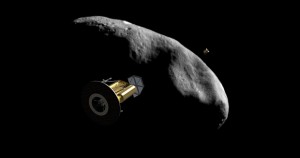 April 24, 2012 marked a milestone in human activities in outer space with the announcement by a group of entrepreneurs, engineers, and investors of the formation of Planetary Resources, Inc.  The company, which features such investors as aerospace innovator Ross Perot, Jr. and filmmaker James Cameron, is being led by President and Chief Engineer Chris Lewicki, a former NASA Mars mission manager, and Peter Diamandis and Eric Anderson serving as co-chairmen.

The press conference outlined the company’s ambitious plan to extract resources from near-Earth asteroids. This plan is broken down into three phases.  The first phase, which is scheduled to launch in twenty-four months, will deploy Earth-orbiting satellites to identify near-Earth asteroids that have potential resources for harvesting.  The second phase involves sending spacecraft beyond earth orbit to provide reconnaissance of near-earth asteroids for potential exploitation of resources including water.  Neither of these planned activities fall outside of the norm of the current body of international space law, and except for their commercial nature they are similar to government-sponsored missions.

However, the third phase of Planetary Resources’ plan leads into uncharted waters and potentially falls outside the current body of space law.  The third phase involves deploying unmanned spacecraft to previously identified near-Earth asteroids and begins the process of extracting minerals and other resources for utilization.  The question is how this plan fits within the scheme of the current body of space law and how that law will be stretched and modified to meet the challenges thrust upon it.

The proposed plan by Planetary Resources to harvest resources from asteroids will implicate the Outer Space Treaty primarily in that the United States, which will likely serve as the launching State for Planetary Resources’ activities, will ultimately be responsible for the activities performed in outer space by the company.  This means that the United States will not only be responsible for approving the proposed activities, but it will also be accountable for demonstrating to the rest of the international community that Planetary Resources’ activities are consistent with the principles of the Outer Space Treaty.

Extraction of extraterrestrial resources is not prohibited per se by the Outer Space Treaty; however, to the extent that extraction implicates a property interest, such an activity could be prohibited.  The pertinent part of the Outer Space Treaty dealing with property rights is the prohibition on nations appropriating outer space and extraterrestrial bodies such as the Moon and asteroids as their sovereign territory.  While there is no disagreement about sovereign nations claiming property rights in outer space, whether private individuals, including legal entities such as Planetary Resources, can make claims and appropriate these bodies and the resources within is up for debate.

The crux of the debate is whether an exception that allows private ownership exists within the Outer Space Treaty.  This question is a matter of continuing debate with one side claiming that no such exception exists and the other claiming that it does.  Until now, the debate has been abstract and both sides have proffered arguments supporting their positions.  However, with the potential of actual resource extraction occurring within the decade, the stakes are substantially higher than winning an academic debate.  Literally billions of dollars will be invested to perform extraction missions on near-Earth asteroids, and if the status of private property rights is not settled, the United States government may be faced with the choice of either halting Planetary Resources’ extraction activities or facing the possibly that it may be sanctioning an activity that could be illegal under international law and the resultant diplomatic and political fallout.

The Liability Convention and Indemnity

The question of effectiveness also applies to incidents that may occur in outer space as a result of Planetary Resources’ activities.  This second scenario, outlined in Article III of the Liability Convention, has yet to be tested. The incident between Cosmos 2251 and Iridium 33, which could have implicated this scenario of the Liability Convention, failed to trigger because there was insufficient evidence to determine which party was at fault and to what extent the parties were at fault.  With Planetary Resources’ activities likely to increase the amount of traffic in both medium and low Earth orbit, the potential for accidents to occur will increase.  The question is whether the Liability Convention as it stands today is sufficient to address the potential incidents that could be caused by this activity.

Notably, the Liability Convention implicates government responsibility for the activities of those operating under its jurisdiction and for any damages that may occur as a result.  It is common practice for a launching State to require an entity performing outer space activities under its jurisdiction to provide indemnification for any damage that the government may have to pay compensation for.  However, with the magnitude and scope of activities planned by Planetary Resources, the question is what is the proper amount of surety to post in the event that an accident occurs?  This also begs the question that given the potential wealth that these mining operations will generate, should the amount of compensation made available to an aggrieved party go beyond what a government will offer as fair compensation?

The legal wild card in the resource extraction activities proposed by Planetary Resources is the Moon Treaty.  This controversial child of the Outer Space Treaty has been rendered an outcast by the three major space-faring nations even though it has seventeen parties who have either signed, acceded to, or ratified it, which makes it binding international law.  Yet, most legal scholars consider the Moon Treaty failed international law and irrelevant.  However, the Moon Treaty not only deals with the Moon, but also planets and asteroids, which makes it a potential player in the planned extraction activities. 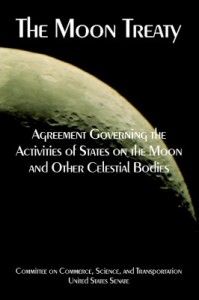 The Moon Treaty has 13 parties and 4 signatories, none of which are major space powers.

The precepts of the Moon Treaty directly prohibit private ownership, thus addressing the contentious issue left open by its parent.  It also addresses resource extraction by approaching it from the point of view of wealth distribution amongst the nations of the Earth, thus subordinating profit.  The Moon Treaty goes further by mandating the creation of a yet-to-be defined international legal regime to oversee the extraction and distribution of extraterrestrial resources.  It is this legal regime, which is similar to one found in the original draft of the Law of the Sea Convention, that has proven to be controversial to the major space faring nations.

However, with the likelihood of resource extraction becoming a reality, the Moon Treaty may find new vigor with non-parties joining the accord and adding new voices in the chorus to make its effect as international law more pronounced.  Even more so, countries such as the Russian Federation and the People’s Republic of China, which both refused to become part of the Moon Treaty when originally opened for signing, may decide to throw their support behind the accord instead of facing the risk of being left behind in resource extraction activities.  Such support could provide sufficient political and soft-power pressure such that the United States may be forced to stall Planetary Resources’ activities until such time as it could negotiate an annex to the Moon Treaty as has been done with the Law of the Sea Convention.  The effect would be to effectively stall extraction activities until the legal issues could be resolved.

During Planetary Resources’ press conference, the approach being planned to meet the ambitious goals set forth was likened to the revolutionary effect that the personal computer had in ushering in the information age.  That analogy, while focusing on technical breakthroughs, ironically also rings through for the challenges encountered in the legal arena.  Like the complex legal issues ushered in by the information age, resource extraction as envisioned by Planetary Resources will likewise usher in complex legal challenges that must be met preemptively or reactively.  The question is whether the current legal regime of outer space law is ready to meet the challenges soon to be imposed upon it by the commercial activities proposed or will it crumble in favor of a new legal regime especially tailored to meet those challenges.