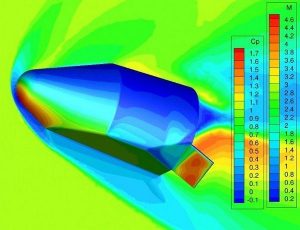 Blue Origin, one of four companies participating in NASA’s commercial crew development program (CCDEV), has historically been reticent about its activities ever since its 2000 founding by Amazon billionaire Jeff Bezos. But an April 26 press release and several upcoming milestones has increased Blue Origin’s visiblity. In April, Blue Origin completed extensive wind tunnel testing of its novel biconic Space Vehicle, which  “provides greater cross-range and interior volume than traditional capsules without the weight penalty of winged spacecraft,” according to Rob Meyerson, president and program manager of Blue Origin. The series of 180 tests was conducted at Lockheed Martin’s High Speed Wind Tunnel Facility. Testing of the company’s BE-3 rocket engine thrust chamber is slated to begin in May at NASA’s Stennis Space Center, as will a system requirements review of the SV. The Space Vehicle is designed to carry seven passengers to the International Space Station under NASA’s commercial crew development program. Blue Origin is currently receiving $22 million from the program and urges NASA not to narrow down the field before the next phase in commercial development. “Competition is definitely better — better for the program, better for the country, better for the future of human spaceflight,” Alexander told MSNBC. Blue Origin could afford to fund its own development but, Alexander explains,  the funding from NASA helps speed up the process. Blue Origin has not provided a target date for its orbital vehicle development. “We’ve always said ‘later in this decade’ is when we’re going to do it,” said Alexander. “Working with NASA will just accelerate us.” The first commercial crew launches will likey take place aboard an Atlas 5 rocket until Blue Origin’s own reusable rocket system is ready. Blue Origin is also working on a suborbital vehicle, the New Shepard, targeted at microgravity researchers and tourists. New Shepard will use a similar propulsion module to the reusable booster that is to lift SV into space. Both are designed for vertical take-off, vertical landing. Before the latest announcement, the last news from Blue Origin regarded their loss of a PM 2 vehicle in flight testing in August 2011. Ground controllers lost contact with the vehicle after launch and had to destroy it. As Bezos said in a statment at the time: “Not the outcome any of us wanted, but we’re signed up for this to be hard.” Watch a successful Blue Origin hop test from 2011 in the video below: