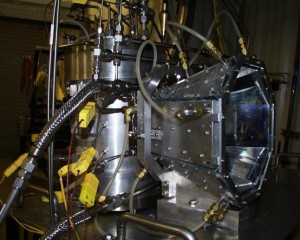 Researchers from the University of Colorado have designed a novel water splitting solar-thermal system to produce hydrogen fuel. This research is being funded by the National Science Foundation and by the U.S. Department of Energy and it will lay the foundations for the use of hydrogen as a green fuel. The simplified reaction sequence may also provide new opportunities to produce hydrogen fuel in space.

The system uses an array of mirrors to concentrate sunlight onto single point on a huge tower. This generates temperatures as high as 1,350 Celsius, which is then transferred to a reactor containing metal oxides. Due to the high temperature, the metal oxides release oxygen, forming a new compound which seeks out oxygen atoms. When steam is introduced to this compound, the oxygen from the steam adheres to the surface of the metal oxide, and freeing up the hydrogen from steam.

“We have designed something here that is very different from other methods and frankly something that nobody thought was possible before,” said Alan Weimer a Professor from the University of Colorado Chemical and Biological Engineering department, Executive Director of the Colorado Center for Biorefining and Biofuels (C2B2), and research group leader. He added that, “Splitting water with sunlight is the Holy Grail of a sustainable hydrogen economy.” 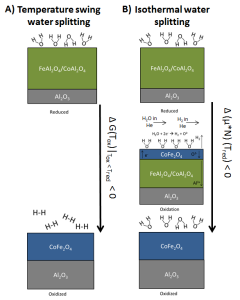 “One of the key differences between the CU method and other methods developed to split water is the ability to conduct two chemical reactions at the same temperature,” said study co-author Charles Musgrave, a Professor from the Chemical and Biological Engineering department. “One of the big innovations in our system is that there is no swing in the temperature. The whole process is driven by either turning a steam valve on or off.”

The challenge is to heat the metal oxides to the lowest possible temperature that enables the desired chemical reactions so that excess heat doesn’t cause any damage to the reactor or tower. The amount of hydrogen which can be produced depends on the amount of metal oxides and steam. Weimer’s team has proposed a design with reactor tubes roughly 30 cm in diameter and a meter long, filled with metal oxides, stacked on each other.

Although this system is feasible and efficient, its commercialization may take several years. “With the price of natural gas so low, there is no incentive to burn clean energy,” said Weimer. “There would have to be a substantial monetary penalty for putting carbon into the atmosphere, or the price of fossil fuels would have to go way up.”

The hurdles for use in space may be lower, but not any quicker. While hydrogen fuel cells have been used in space vehicles like NASA’s retired Space Shuttle for years, on-orbit production of this variety may not be worthwhile until there is a space-based population who requires it.