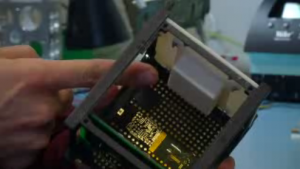 The Ecole Polytechnique Federale de Lausanne (EPFL) has announced it has developed a lightweight propulsion system that could propel small satellites to the Moon using only 100mL of fuel. The entire propulsion system, which comprises an electric ion engine powered by photovoltaic solar cells, weighs only 200g including propellant, and is small enough to fit within the limited envelope of a standard CubeSat nanosatellite.

“The big limitation [of current nanosatellites] is that [they’re] stuck in whatever orbit they’re put in” says Herbert Shea, Associate Professor at the EPFL. “To free them, we need a very efficient, miniaturized propulsion system. […] [MicroThrust] is very efficient, and using only this very small volume, we could send such a satellite from Earth orbit to Moon orbit.”

Although the system only works in space and could not be used to launch from Earth, if successful, the Microthrust system could greatly increase the list of potential applications for nanosatellites, which are currently limited to use in low Earth orbit. “You can then go to Mars, you can go to the Moon, you can go to asteroids, you can do all sorts of science exploration missions that are today impossible for Universities and for many countries because of the high cost” explained Shea.

EPFL has already announced plans for the Microthrust system to fly on two missions. The first is the Orbital Low Frequency Array, or OLFAR, which intends to create a distributed low-frequency radio astronomy array in space using nanosatellites. Microthrust could be used to propel the array of satellites beyond the Moon where they could look deeper into the universe. EPFL is also planning to use MicroThrust on the CleanSpaceOne satellite, which intends to demonstrate active removal of space debris using a 3U Cubesat.

The propulsion system has been designed to fit within the Cubesat standard, developed by California Polytechnic State University and Stanford University in 1999 to encourage universities and amateur space enthusiasts to develop standard hardware and increase accessibility to space. The standard designates a single unit (or “1U”) as a cubic nanosatellite weighing approximately 1kg and measuring 10cm along each outer edge. Cubesats can be either 1U in size, or any integer multiple for larger more complex missions.

The video below shows an interview with Herbert Shea by the EPFL University news.
[youtube http://www.youtube.com/watch?v=YJlSI_l5g4M]