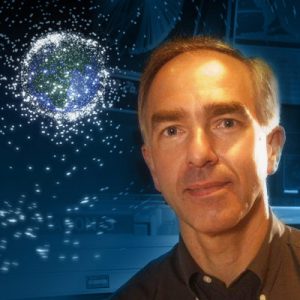 The Royal Aeronautical Society  invited some of the brightest minds in the world of space debris to its Space Traffic Control Conference that took place in London on July 2. Opening the event with a rather grim outlook was ESA’s space debris boss Heiner Klinkrad who pointed to the recent space debris evolution forecast.

The analysis, a joint project of several space agencies including NASA, ESA and JAXA, concluded that even if we stopped launching new objects into space completely and immediately, it still wouldn’t suffice to ward off the onset of the Kessler syndrome in several decades.

“Today, a Cosmos-Iridium type of collision can statistically occur every 5 years but the interval will shorten as a matter of time if we don’t start acting promptly,” Klinkrad said, reminding the audience that a collision of the Cosmos-Iridium magnitude could produce thousands of fragments that would result in new collisions taking place over and again. “Active space debris removal is necessary, but the technology already exists and is promising,” he said.

“In the past twelve months we have tested our net space debris removal concept and a harpoon concept in microgravity conditions in a drop tower test and during a parabolic flight,” Jamie Reed, Specialist Mission Systems Engineer of Astrium UK, said confirming Klinkrad’s optimism. “We believe we have progressed enough to achieve the 2017 test launch target and to commence first orbit cleaning operations in 2020.” 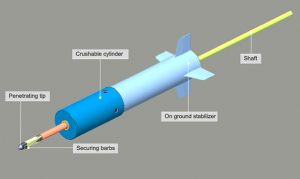 As active space debris removal is something no one has ever done before, there are still many challenges. For example the positioning, navigation, and synchronization technology needs to be perfected to make sure the ‘chaser satellite’ really captures the right piece of space junk and not someone else’s operational spacecraft. Reed said that the use of LIDAR, 2D and 3D cameras appears the most promising to tackle this problem.

The design of a universal orbit cleaning satellite is further complicated by the fact that there are decommissioned satellites and spent rocket stages of all sizes and shapes orbiting the Earth and very few concepts offer such flexibility.

A research team from the University of Surrey introduced its sail-drag-based deorbit technology. The concept works with solar-sail like materials that are attached to a satellite carefully folded. At the satellite’s end of life, the sail is automatically deployed increasing the spacecraft’s surface area multiple times. As a result, drag from the residual atmosphere in  low Earth orbit is increased and the spacecraft reenters in a fraction of the time needed for natural deorbiting.

“Naturally, a 3kg satellite orbiting at the 600 km altitude would require up to 88 years to reenter. When we deploy a drag sail after its mission ends, it will burn up in the atmosphere in 130 days,” said professor Vaios Lappas, the leader of the team.

Their first project – DeorbitSAIL – funded by the European Union and conducted jointly with the DLR, Astrium and other European research institutions, is set to launch its first experimental satellite to orbit in 2014. It will be the first test of the sail-added deorbiting technology in Europe and perhaps in the whole world.

“Eventually, we would like to develop a system that would enable attaching such sails to decommissioned satellites that are already in orbit,” Lappas said, explaining that the sail-assisted reentry is most suitable for small satellites up to 500kg of mass.

OHB’s Space System Engineer Charlotte Bewick addressed concerns of some experts related to the sail-drag technology. Speaking about calculations she performed as a part of her PhD studies, she confirmed that deploying the drag sail, which increases the surface area of the spacecraft considerably, results in the inflated spacecraft having greater probability of hitting another object on the way towards reentry. However, she said, with the exception of larger satellites, the reduced time the spacecraft spends clogging the orbit fully makes up for the increased risk. 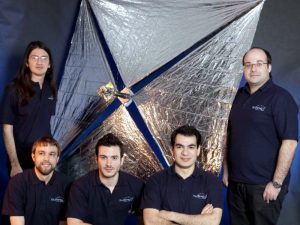 Stuart Eves, the Principal Engineer at Surrey Satellite Technology (SSTL) introduced a much broader approach. He said the space community should draw inspiration from air-traffic management and establish a system for global information exchange and monitoring that would enable anyone around the world to know exactly where operational spacecraft are at every moment. “Especially for spacecraft in high orbits which are more difficult to track, the operators realized that the information available from US military resources are not accurate enough and they set up the Space Data Association for exchange of telemetry data and information about planned maneuvers ,” Eves said explaining what inspired him to propose the next step in space traffic management. “If we want to do a better job at space traffic management we would have to build on that sort of system and exchange much more data in better timeliness in order to have a real chance to actually dodge the debris.”

According to Eves, spacecraft in the future could be equipped with tracking beacons in a similar way ships or aircraft are obliged to be. Laser reflectors mounted on the satellites would allow ground based laser systems to locate a spacecraft’s position even after it has been decommissioned. Whichever option would be favored eventually, the space community has to prove they are taking the issue seriously, Eves said, otherwise, they might lose out.

At the end of the day, a research team from the University of Glasgow did a short demonstration of deorbit-sail deployment on a cubesat mockup. You can watch it here: