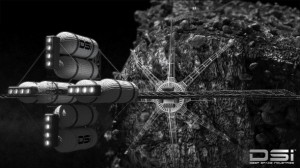 A second asteroid harvesting company has announced that it is open for business, less than one year after Planetary Resources officially announced their long term plan for mining valuable materials from space. Deep Space Industries (DSI) announced in a press conference in Santa Monica on 22nd January that they intend to launch a series of prospector and harvester probes to investigate and mine near Earth objects (NEOs) of their precious contents.

DSI is run by CEO David Gump, who has previous space company experience from Astrobotic, and Rick Tumlinson, of Orbital Outfitters, who plan to sell space suits to private companies.

During the press conference, the DSI panel were asked if they see themselves as being rivals to Planetary Resources.  Tumlinson explained that they were not in competition, and added “One company may be a fluke….two companies…that’s an industry.”

The first wave of prospector spacecraft, dubbed the “Firefly” class, is approximately 25 kg and is made from largely CubeSat standard hardware, allowing rapid production at low cost. The Firefly class will consist of one-way missions to scan and identify potential targets close up. It will identify the structure of the asteroid, be it solid or rubble pile, as well as other information such as spin rate. 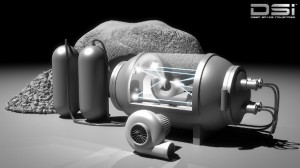 The second wave of larger sample return spacecraft are called the “Dragonfly” class, have a mass of 32 kg, and will be capable of returning up to 68 kg of samples to LEO, where it will be processed in DSI’s Microgravity Foundry system which is expected to contain 3D printer technology capable of fabricating fasteners, gears, and other spacecraft components.

Larger still are the “Harvestor” class missions, which are planned to berth directly with larger asteroids, and would require the full capacity of a heavy launch vehicle to reach space.  The Harvestor-class operations are hoped to be capable of mining thousands of tons per year.

Other planned developments include a Fuel Processor craft, which like the Harvestor will berth with water rich asteroids for the production of rocket fuel, and a Wheel Habitat space station, which resembles the Von Braun type design as seen in 2001: A Space Odyssey.

“Using low cost technologies, and combining the legacy of our space program with the innovation of today’s young high tech geniuses, we will do things that would have been impossible just a few years ago,” remarked Tumlinson.

DSI plans to launch their first prospector missions as part of a ride-share agreement in 2015, with actual mining operations to begin in 2020.

Below, the Deep Space Industries press conference in full: