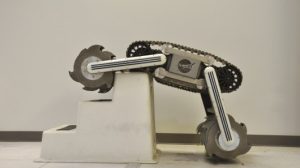 RASSOR, which stands for Regolith Advanced Surface Systems Operations Robot, has a mass of 45kg, and is designed to scoop the top layers of regolith from the lunar surface.  The RASSOR uses two rotating bucket drums to remove and store up to 18 kg of material, before returning to a depot to deliver its cargo.  Once it has returned to the depot, RASSOR stands on its tracks, raises the drums, and deposits the materials in a hopper before returning to work.

Lunar regolith contains materials that can be used to produce air, water, fuel, and construction materials such as “Lunarcrete”, which is similar to concrete, but made from lunar regolith.

“Producing water and fuel from the lunar soil would save the tremendous expense of launching the supplies from Earth, since 90 percent of a rocket’s mass normally consists of propellant, which can be made on the moon,” said a NASA spokesperson.

Harvesting materials using traditional terrestrial methods can be problematic in low gravity environments, as the low mass of the vehicle in the low gravitational field doesn’t allow the reaction force needed to penetrate the deeper layers of regolith.  However, the counter-rotating bucket drums provide a near-zero net reaction force, meaning that the mass of the vehicle is not a determining factor in the system’s ability to excavate.

RASSOR can be controlled wirelessly, with the aid of onboard cameras and can also be programmed to operate autonomously.  Additionally, owing to its symmetrical design, it can carry on functioning should it accidentally flip over. RASSOR has been designed to survive for 5 year missions, which is ideal as RASSOR would need to work 16 hour daily shifts for a total of 5 years to harvest any significantly usable volume of material.

NASA has stated that a second, more refined version of the robot is in development, and is expected to begin tests in early 2014.

The video below shows the problems associated with digging up lunar regolith, and how NASA launched a competition enabling the public to present their ideas for regolith excavation: