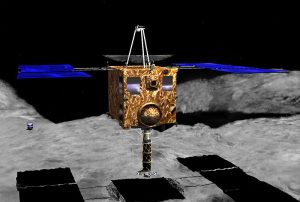 Rendering of the JAXA probe Hayabusa hovering over Itokawa. Hayabusa is the only spacecraft to have landed on an asteroid (Credits: J.C.Garry).

Planetary Research, Inc. is set to announce its plans to pursue mining of asteroids for minerals. The announcement is scheduled to take place April 24 from the Museum of Flight in Seattle. A somewhat brief and cryptic press release from the new company stated: “The company will overlay two critical sectors – space exploration and natural resources – to add trillions of dollars to the global GDP. This innovative start-up will create a new industry and a new definition of ‘natural resources.’” This has been interpreted by many to refer to asteroid mining, an interpretation that was reportedly anonymously confirmed by a company insider. Planetary Reserarch, Inc. will be led by President and Chief Engineer Chris Lewicki, a former NASA Mars mission manager, with Peter Diamandis and Eric Anderson serving as co-chairmen. Diamandis and Anderson are known for their ventures in support of commercial space, with Diamandis leading the X Prize Foundation and founding the Zero-G Corporation while Anderson serves as chairman of Space Adventures which he founded, brokering tourist flights to ISS aboard the Soyuz. The venture has some high profile backers with several Google executives  including Larry Page and Eric Schmidt, film director James Cameron, and Ross Perot, Jr., son of the presidential candidate, among the founding investors. “I believe that opening up the resources of space for the benefit of humanity is critical,” said Mr. Diamandis  in an interview with Forbes magazine earlier in the year. “Since my childhood I’ve wanted to do one thing, be an asteroid miner.” NASA has been conducting studies into asteroid utilization as part of its exploration roadmap.   “The possibility of extracting raw materials such as iron and nickel from asteroids has been discussed for decades, but the cost, scientific expertise and technical prowess of fulfilling such as feat have remained an obstacle,” said Amir Efrati of the Wall Street Journal. “NASA experts have projected it could cost tens of billions of dollars and take well over a decade to land astronauts on an asteroid.” The video below discusses some of the technologies that could be used in a mining operation and what resources could be recovered: