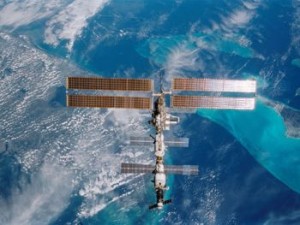 The future of ISS might be bright, with the station enabling travel to asteroids (Credits: NASA).

With its lifetime already being extended beyond initial estimates, the ISS is now set to end its service in 2020. Discussions as to whether it would be worthwhile to make it habitable for another few years are already taking place. Recently, NASA came up with a new option for utilizing this giant 100 billion USD structure to enable travel to asteroids.

After President Obama announced mankind should rather aim for asteroids than return to the Moon, NASA had to start revisiting its plans. One of the ideas to achieve this goal proposes that ISS might be launched from its current position in low Earth orbit into deep space. With the cancellation of NASA’s next generation launcher development and pressure to reduce costs, this might present a serious option to reach asteroids by 2025. 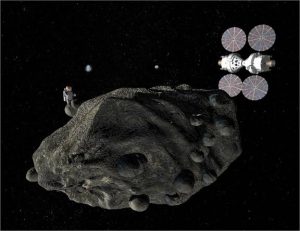 There are different concepts for reaching asteroids, some including ISS (Credits: Lockheed Martin).

Of course, the station would need a major upgrade. A rocket would be attached to it and its thermal and radiation insulation would need to be strengthened to withstand the extreme environment of outer space.  According to estimates, the total costs of this enterprise would be much lower than building a completely new spacecraft from scratch. If the decision is made, all necessary retrofitting could start as soon as 2020. This approach would save the space laboratory and engineering marvel from being destroyed during atmospheric re-entry once the stationkeeping system is switched off.

NASA is currently exploring various possibilities for asteroid missions, including building a brand new spacecraft equipped with artificial gravity. This technological feature, as yet only seen in science fiction, would resolve the problem with negative effects of weightlessness on human body.

In that scenario, ISS might be turned into a base camp  – an assembly place in low Earth orbit that would provide easier access to distant destinations. That would bring considerable cost reduction in space flight as getting from the Earth’s surface to low Earth orbit is the energetically most demanding part of any space mission.

The video below shows a simulated encounter between ISS and asteroids