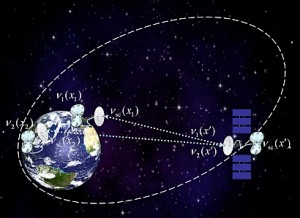 General concept of the STE-QUEST mission. The clock on the satellite is compared with one or more ground clocks as the satellite orbits earth on a highly elliptic orbit. During the perigee the local acceleration of two rubidium isotopes is measured and compared (Credits: ESA).

Flyby anomaly occurs when a spacecraft taking advantage of the gravitational boost provided by an Earth flyby experiences a tiny extra boost in velocity. The anomaly was first observed in 1990 when NASA’s Galileo spacecraft velocity jumped by about 4 mm/s more than expected due to an Earth flyby en route to Jupiter. A similar velocity boost happened during flybys of the NEAR, Cassini , and Rosetta spacecraft. Yet, the origin of flyby anomaly has stumped scientists for two decades.

“A key ingredient in a successful characterization of the flyby anomaly is the accurate determination of the position and velocity of the spacecraft during gravitational assist,” Jorge Paramos at the Technical University of Lisbon and Gerald Hechenblaikner at the satellite builder Astrium explained in a recent study. “The typical momentum transferred during flyby is on the order of several mm/s, so that the specified tracking accuracy of 0.2 mm/s for STE-QUEST is easily sufficient to achieve this goal.”

The STE-QUEST mission, which is designed for a nominal lifespan of 5 years and has an orbital period of 16 h, would probe the range of perigee altitudes from 690 km to 2000 km where flyby anomalies have been reported. It would also be able to profile the variation of the unexplained velocity magnitudes with varying distance from Earth — a characteristic of flyby anomaly that cannot be directly extracted from available Earth gravitational assist data. The payload will also have a measurement unit capable of receiving signals from the next generation of global navigation satellite systems, which should provide the kind of spatial resolution data that can accurately measure the anomaly.

Studying Earth-flyby anomaly through laboratory experiments and astrophysical observations is hard because the events are rare and there is little useful data available. No space agency has actually tracked a spacecraft in detail during gravity assist maneuver as it passes the point of closest approach to the Earth. The anomaly comes about when space scientists are unable to find a single hyperbolic arc that matches the spacecraft’s trajectory. Instead, they end up fitting two distinct arcs—an inbound and outbound arc–and attribute the difference to some anomalous change in velocity.

Both ESA and NASA have conducted numerous investigations over the years and have thoroughly eliminated or systematically accounted for all the usual causes of spacecraft velocity errors including software bugs, calculation errors, tracking uncertainties and causes, leaving the velocity anomaly maddeningly unexplained.

Many components and subsystems of the STE-QUEST satellite have been developed up to engineering or flight models and have technical readiness level of 6-8, including the soon to be launched ESA Atomic Clock Ensemble in Space (ACES) that aims to perform measurements between ground and space clocks using microwave clocks. In particular, the atomic clock and the associated microwave link will be validated in space on the International Space Station in 2014.

The STE-QUEST was selected by ESA, together with three other candidates, for an assessment study until mid-2013.

Below, watch animation of NASA’s Juno spacecraft Earth-flyby maneuver that gives Juno the boost in velocity it needs to coast all the way to Jupiter: