The Indian Space Research Organization (ISRO) was established to  “develop space technology and its application to various national tasks.” ISRO has successfully launched numerous satellites with applications in communication, navigation, Earth observation, and in 2008 launched India’s first lunar probe, Chandrayaan-1. But for the past two month, ISRO has been tied up in a controversy that has divided its scientists and dominated the press.

It all began in 2005 when Antrix, the commercial arm of ISRO, leased 70 MHz of S-band transponder spectrum to Devas Multimedia – at that point an unknown company partially owned by a former ISRO scientist – as part of a communications initiative aimed at making multimedia access available across India. In February 2011, the Indian government cancelled the contract with Devas, citing improper behaviour on the part of Antrix and ISRO personnel. According to a government probe, the spectrum availability was not made public prior to granting the contract, resulting in an exclusive lease to Devas for lower than market value. The government’s Space Commission was not properly notified of the contract and was actively deceived in November 2005 when it was informed that several service providers were interested in the satellite capacity; meanwhile, Antrix had already signed the Devas deal. “There have been not only serious administrative and procedural lapses but also suggestion of the collusive behaviour on part of certain individuals,” the inquiry headed by former chief vigilance commissioner Pratyush Sinha concluded.

In January 2012, four scientists were officially issued a lifetime ban from holding any government position: former ISRO chief G. Madhavan Nair, former director of ISRO’s satellite communication program A. Bhaskaranarayana, former Antrix managing director K.R. Sridhara Murthy, and former head of ISRO’s Bangalore Satellite Center K.N. Shankara. There was an immediate outcry from the scientific community and Nair, current president of the International Academy of Astronautics in Paris,  has continued to protest both the investigative panel’s findings and his and his colleagues’ blacklisting, most recently through an open letter to Prime Minister Manmohan Singh on February 24. 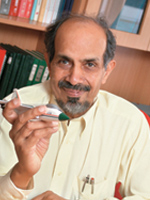 Many senior Indian scientists side with Nair on the issue. It “has done a lot of damage to morale. … Nobody will want to take risks or do anything bold or out of the box,” says Anil Kakodkar, a nuclear engineer and former chair of India’s Atomic Energy Commission. “Top scientists who have served the country well have just been dumped and thrown out like garbage,” adds Singh’s science adviser, C. N. R. Rao, a chemist at the Jawaharlal Nehru Centre. He calls it “an insult to the Indian scientific community.” On February 23, senior space scientist Roddam Nrasimha resigned from the Indian Space Commission in protest of the blacklisting. Nrasimha was a member of the probe responsible for investigating the Devas deal. “We found no evidence of wrong-doing or fraud or personal gain. I am deeply distressed over the humiliation heaped on people who spent their whole professional lives working for a valued national goal,” he stated.

Not everyone agrees, however: “Not informing the government about such a private contract is a big lapse,” says M. R. Srinivasan, a nuclear engineer and former member of the Planning Commission, a government body that crafts India’s 5-year plans. “There is no justification for keeping the government in the dark, as it involves taxpayer money,” says Srinivasan, who was not a member of either investigative committee.

At this time it does not look likely that a new investigation will be commissioned by the government, as requested by Nair. Devas has challenged the cancellation of their contract and are due for a court hearing on the matter in April. Whether Prime Minister Singh will intervene to suspend the ban against the blacklisted scientists remains to be seen. The scientists are also challenging the legality of the ban in court.  One way or another, it seems likely that India’s space community will be tied up with very Earthly matters for months to come.