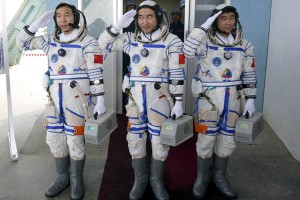 China plans to send people to the Moon as part of its new space policy, announced on December 29 in a paper entitled “China’s Space Activities in 2011.” The manned lunar mission is considered to be a symbol that will highlight the status of China as a space power equal to the USA and Russia. The mission would be the first manned lunar mission since Eugene Cernan walked on the Moon in 1972.
In addition to the lunar mission, the Chinese space-policy paper also lists a number of ambitious goals for the future. The most important one is the improvement of the Long March rockets within

Infographic on Tiangong-1 and the Chinese Space Station (Credits: BBC)

the next five years. The Long March-5 will be able to lift 25 metric tons into Low Earth Orbit, 600 kg more than the American space shuttles. Another prominent goal is to upgrade China’s satellite networks by launching a large number of high resolution Earth Observation satellites in the next five years, creating the Chinese equivalent of USA’s GPS by 2020. Other goals include unmanned lunar missions, human orbital spaceflights, deep-space exploration and improvements to Tiangong-1, the Chinese space station.

It is noteworthy that the new Chinese space policy does not include any missions or collaboration with the International Space Station, perhaps, theorizes John Pike, head of Globalsecurity.org, due to American reluctance to share information with a country that is, for the moment at least, more committed to space utilization than they are.