India’s Mars Orbiter Mission (MOM), performed the Trans-Mars Injection (TMI) on 1st December, and is off on its long journey towards Mars. The spacecraft has crossed the Moon’s orbit and is now the farthest object India has ever put in Space.

“Then it travels a long path….after travelling roughly 680 million kilometres through this path, it comes closer to Mars … on September 24 of next year 2014,” said V Koteswara Rao, Scientific Secretary at ISRO.

The MOM spacecraft, also known as “Mangalyaan” which means “Mars craft” in Hindi, has a mass of about 1350 kg and was developed in record time – just 18 months. MOM is a technology demonstrator mission with the goal to aid development of the technologies required for design, planning, management and operations of an interplanetary mission.

“We want to use the first opportunity to put a spacecraft and orbit it around Mars,” said K. Radhakrishnan, ISRO Chairman. “And, once it is there safely, then conduct a few meaningful experiments and energize the scientific community.” 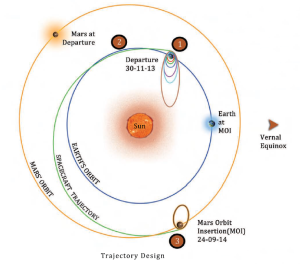 MOM launched close on the heels of NASA’s Mars Atmosphere and Volatile EvolutioN (MAVEN), a space probe designed to study the Martian atmosphere while orbiting Mars which launched on 18th November. MAVEN’s mission carries a cost of $672 million, while MOM costs only $70 million for this first modest effort by India.

“We are more application-specific in our approach. So we don’t spend much on research. But this is one of our efforts in exploratory science… India’s modest contribution to the understanding of science,” said ISRO officials.

MAVEN and MOM are intended to study the Martian atmosphere, to understand why the planet’s liquid water was lost, and how the Martian climate was transformed into the cold, dry climate present today.

Orbiting a satellite around Mars is extremely difficult. A little more than 50% of previous missions have failed. If successful, Indian Space Research Organization (ISRO) will the fourth space agency to reach Mars, following by NASA, Russian Space Agency, and European Space Agency.

Below, video of MOM’s launch: