Scientists at the U.S. Naval Research Laboratory (NRL) are looking into an innovative “sweeping” method to mitigate the ever-increasing LEO space debris issue. 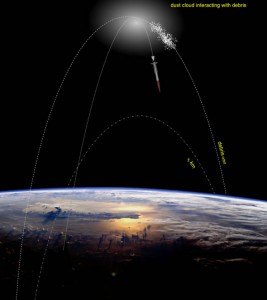 The concept is to disperse tons of dust to sweep past large quantities of the debris in order to slow them down and drag them down into the upper region of the atmosphere, where they will eventually decay due to heat. According to NASA estimations, there are more than 21,000 orbital debris objects larger than 10 centimeters in diameter in LEO, and approximately 500,000 particles between 1 and 10 centimeters. These objects pose a great threat to hundreds of satellites and to the International Space Station, and will soon be dense enough to reach the threshold for collisional cascade, known as the Kessler effect. They will then start colliding among themselves more frequently, thus exponentially increasing the risk for spacecrafts in the region. “Hundreds of near-misses occur each year between orbital debris and operational satellites,” says Gurudas Ganguli, head of NRL Space Analysis and Application Section at the Plasma Physics Division. “Dust, similar to that which naturally fills the near-Earth environment, can be deployed artificially in a narrow altitude band to enhance drag on debris and force re-entry.” The resources for this project could be relatively easy to find. Approximately 100 tons of cosmic dust enters the Earth’s atmosphere every day in the form of micrometeorites, while considerable amounts of dust are produced by human activities on Earth. Deploying this dust opposite debris would increase the latter’s drag and force it to descend. NRL engineers estimate that between 20 and 40 tons of dust would suffice, if deployed in a synchronized fashion and in a narrow layer. “It is well known that the natural drag due to neutral atmosphere decays satellite orbits,” explains Ganguli. “We use the natural atmospheric drag to decay the deployed dust orbits and simultaneously use the dust to induce enhanced drag on the orbital debris. Like the natural dust, most of the deployed dust as well as the small orbital debris will incinerate while reentering the Earth’s dense atmosphere. So the environmental effect of releasing the dust is expected to be benign.” Should this seemingly far-fetched but low-risk idea work, off-the-shelf technologies could be used for continuing active debris removal in the near future. Early analysis has identified tungsten as a favorable candidate for manufacture of artificial dust due to its high density and abundance as well as its relatively low cost. The report below explains the dangers of the pending space debris “tipping point”: [youtube http://www.youtube.com/watch?v=2gTkoFJ2yIQ]