February 10, 2012 marks the third anniversary of the first ever collision between two intact satellites in orbit.  The collision, which occurred between Iridium 33 and Cosmos 2251 over Siberia, stunned the aerospace community and brought the realization that even though the heavens were vast, the orbital planes above the Earth are finite and there are few if any rules of the road when the traffic within that finite space becomes congested.

After the initial astonishment from the collision, the finger-pointing between the operators of the satellites in the United States and the Russian Federation began. The Russian Federation was quick to point out that Cosmos 2251 was a derelict satellite incapable of maneuvering, and it correctly asserted that it did not have an obligation under international law to dispose of Cosmos 2251 after it became derelict.  The Russian Federation then placed fault for the incident on Iridium LLC’s failure to maneuver their spacecraft so as to avoid the collision.  For its part Iridium LLC made the contention that it did not have any obligation to avoid the collision even if was aware that such a collision would occur.

In its wake the question was begged whether the second scenario of the Liability Convention would be invoked to recover compensation for the loss of either satellite.  Under the second scenario of the Liability Convention, which has never been tested, a fault liability standard applies whereby a State will be considered liable only if it can be shown that the damage caused was due to the fault of the State or States responsible for the launch of the space object.  This theory of liability is similar to the maritime law standard of comparative fault, whereby the percentage of fault and thus liability will be apportioned according to the negligence of each party involved to the aggregate liability.  Once the percentage of fault for each party is determined, the total amount of damages for the incident will be determined, and from that total each party will be apportioned its damages based on its percentage of fault.  However, the conflicting information leading up to the crash coupled with the lack of tracking data for that orbital section of outer space gave neither party sufficient evidence to meet the fault standard set by the second scenario. 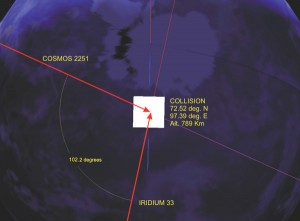 Even though the incident did not have a resolution under the Liability Convention, and international law in general, several positive results came about.  First, the collision brought the topic of orbital space debris and space situational awareness to the forefront and made the general public aware of the issue.  While awareness in of itself is not curative, it did give the issue much needed attention and was helpful to motivate actors who were otherwise complacent about space debris and space situational awareness in general

In spite of these beneficial outcomes, more still needs to be accomplished.  The issue of space debris and space situational awareness is one that needs to move forward in terms of understanding what is happening in the outer space environment.  While many of the space-faring nations have implemented guidelines to lessen the accumulation of space debris, there still remains a clear and present issue with space debris already in orbit.  Unfortunately,  politics, legalities and economics make the issue difficult to address.  However, if we remember anything on this anniversary of the collision between Iridium 33 and Cosmos 2251,  it is that the problem cannot be wished away and ignoring it will only make certain that another, perhaps more serious, incident will occur in the future.