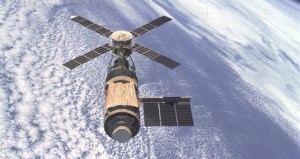 Putting all the information together, one might think Skylab’s destiny was to test NASA’s nerves and crisis management ability. Whereas the launch and onset of operations 40 years ago showed how dedicated NASA was to solving all the faults and glitches that threatened the project from the start, the final episodes of the station’s life were marked with planning and scheduling errors and inaccurate estimates. As a result, the station that had enabled scientists to gather invaluable data about the Sun and made the discovery of coronal mass ejections possible, became a synonym for dangerous uncontrollable space debris. During the final stages of re-entry, controllers lost track of the station and learned with horror that it struck a rather populated area of Western Australia.

The infamous end of Skylab was preceded by years of hesitation. After the third (and the last) crew had departed from Skylab on February 8, 1974, the station remained empty. The astronauts had left a bag of supplies there and the hatch unlocked – just in case the chance existed for the outpost to accommodate human crew again in the future. Despite the official standpoint of NASA that the station was old, it still had enough oxygen to support one astronaut for 420 days and enough water for him for a half year’s stay. Besides, the supplies could have been easily replenished.

However, with all the Saturn rockets used up and finances being channeled toward the newly approved Space Shuttle Program, NASA made it clear that Skylab was no longer a priority. In the back of minds, hope still existed that Space Shuttle would be operational before Skylab slipped away from orbit and burned in the atmosphere. At that time, the launch of the new flagship program was scheduled for 1979 and some vague promises had been made that the second mission could deliver a specially designed booster to lift Skylab to higher orbit where it could safely await refurbishment.

But the odds were against Skylab and its trademark solar telescope performing any further work. Ironically, the Sun – the object of Skylab’s research that helped the station enter history books – was now working against it. The number of coronal mass ejections (the very same phenomena Skylab had helped to discover) increased. The radiation heated the Earth’s atmosphere and it expanded. Skylab therefore started experiencing atmospheric drag much earlier than NASA had foreseen. It soon became clear the reentry would take place around the middle of 1979.

The race against time began – NASA still believed the first Space Shuttle mission would to take place in July the same year – just in time to save Skylab. Nevertheless, by December 1978, NASA surrendered. It was obvious that the Space Shuttle schedule was falling behind not months but years, and there was nothing in NASA’s power to keep Skylab in orbit. 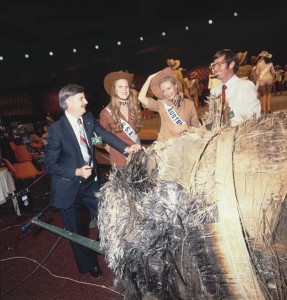 A piece of Skylab debris on display at the 1979 Miss Universe contest held in Perth (Source: the Australian Government).

The public got concerned – what would happen when an almost 80 ton colossus came crashing down to the ground? A short time before, a nuclear powered Russian satellite struck northern Canada and the topic of space debris made the headlines for the first time in history. When the time came for Skylab to “return home” the event was slated to become a media sensation. The San Francisco Examiner offered $ 10,000 for the first piece of the station delivered to its offices and the competing Chronicle promised to pay $ 200,000 if a subscriber were to be injured or have property damaged.

Then came July 1979. Controllers directed the station towards the southern ocean and hoped it would come down about 1,300 km southeast of Cape Town, South Africa. But as it always had done, not even now did Skylab behave according to expectations. It didn’t burn in the atmosphere as fast as expected and the controllers lost track of the space junk. Due to a calculation error, instead of disappearing in deep waters of the southern ocean, Skylab landed in Western Australia.

Pieces of the station were found scattered between the towns of Esperance and Rawlinna near Perth. Residents reported seeing colorful fireworks as the station broke up in the atmosphere and hearing a rumbling sound. One of the villages fined NASA $ 400 for littering. The reward promised by the San Francisco Examiner went to then 17 year old Stan Thornton who found 24 pieces of Skylab in the garden of a family house in Esperance.

Almost 35 years after Skylab’s reentry, the issue of space debris is becoming more and more pressing. One day, the scientific community will have to figure out how to safely deorbit the International Space Station which is much more voluminous than Skylab used to be.

You can watch authentic footage from the reentry site in the following video.
[youtube http://www.youtube.com/watch?v=Fy1a6JHZJq8]