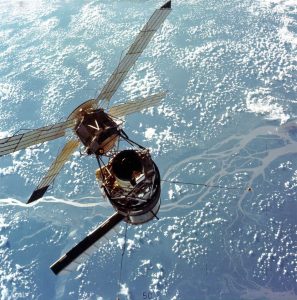 In an episode of Mad Men entitled “The Wheel,” the show’s protagonist, Don Draper, intoned while pitching an ad campaign for a Kodak Carousel slide projector, “Nostalgia – it’s delicate, but potent…in Greek, ‘nostalgia’ literally means ‘the pain from an old wound.’ It’s a twinge in your heart far more powerful than memory alone… It lets us travel the way a child travels – around and around, and back home again, to a place where we know we are loved.”

Nostalgia for an era long past – and for those yet to come – was on full display at the Astronaut Scholarship Foundation’s Skylab 40th Anniversary event, which took place on Saturday evening, July 27, at Kennedy Space Center Visitor Complex’s Apollo/Saturn V Center. The dinner and event tugged at more than heartstrings, as the Skylab astronauts featured discussed going “around and around, and back home again.”

For me, it brought me back to a time when I spent hours reading about the Skylab missions as a child, with my eyes cast toward the future – a future that, in some respects, has yet to arrive. Skylab provided me with my first taste of manned spaceflight excitement, a passion that remains to this day. The images of the spidery cluster floating in space still look oddly futuristic. It was my first vision of what a “spaceship” looked like and it made me optimistic that I would see “space cities” one day. 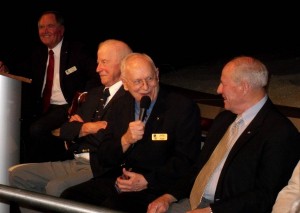 Due to extenuating circumstances, Skylab 2′s Joseph Kerwin and Skylab 3′s Owen Garriott were not able to make it to the event. While their contributions certainly weren’t forgotten, the biggest absence felt at the event was that of Charles “Pete” Conrad, legendary moonwalker and “Sky King.” The famously gap-toothed astronaut was the man in charge of the Skylab program assignments and commanded its first manned mission. His widow, Nancy, was at the event and, like Pete, is wonderfully talkative and a firecracker. But I was wondering how the event’s organizers would tackle the issue of his absence. Conrad died in 1999 from injuries sustained in a motorcycle accident; the loss was inestimable to the spaceflight community.

“So, you think after all those problems you had, do you think you guys had a productive mission?” asked Crippen during the panel discussion, speaking with Skylab 2′s Weitz, who worked in space with Pete (Skylab 2 was also an all-Navy crew, just like Conrad’s previous Gemini 11 and Apollo 12 missions). The Skylab 2 mission was fraught with issues at its beginning, culminating in a spacewalk performed by Kerwin and Conrad, which freed its stuck solar panel.

Weitz, to the laughs of the crowd, responded, “That’s a silly question. Of course we did! But I tell you what, why don’t we let Pete talk.” To my surprise and awe, an empty chair was lit up with lights and Pete’s familiar visage flashed on the Lunar Theater’s projector screen. Pete was there, teleported from the past, talking about the mission at its 1973 post-flight press conference. 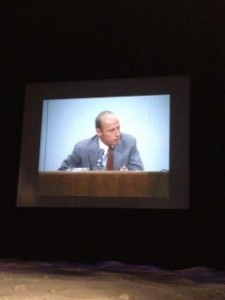 One of the more emotional parts of the evening was a surprise appearance by Pete Conrad. Conrad commanded the first mission to Skylab, he passed away in 1999 (Credits: Emily Carney / AmericaSpace).

Conrad’s words said it succinctly, even from 40 years back: “I think the most important thing about the mission that we can do for Al [Alan Bean, Skylab 3’s commander]…[is] give Al the confidence from us being there 28 days that they’ve got a good home and it will go for 56 [days], no strain.” Bean looked back with a broad smile from where he sat in 2013 (he and Conrad also walked on the moon together during Apollo 12). I wish I could say I was dry-eyed, but I wasn’t…

Conrad’s confidence was not misplaced – Al’s crew would spend 58 days in space, while Skylab 4 would break that duration record with 84 days in space from 1973 to 1974. General Thomas Stafford, who was at the event, relayed to me, “Skylab was a good program…it is too often forgotten.”

But another feeling the event parlayed to me, other than wistfulness for days past, was an urgency to go forward. While the International Space Station floats above us resplendent in microgravity, I’d always envisioned more “Skylabs” in space as a child and was always enthralled by Robert McCall’s images of space cities.

While the event brought to light the “pain from an old wound” – my sadness for the often-overlooked Skylab era – it filled me with nostalgia for an era yet to come, when more space habitation might be a reality.

I still hope to see another Skylab (or Skylabs) fly again, I hope to see cities in space, bases on the Moon, of missions deep into our solar system…

Opinions expressed are those of the author and do not necessarily reflect the views of Space Safety Magazine or AmericaSpace.