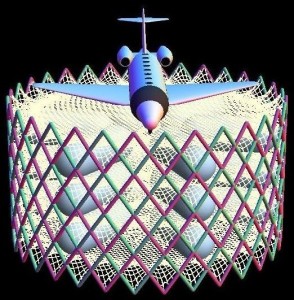 For various reasons, it is not just science fiction writers and dreamers: scientists around the world think about the development of near and far space. It will take quite some time before you will see at the nearest market a table stating “European seaweed,” that will hail from not the Europe we know on Earth, but from the ocean planet Europa, Jupiter’s satellite. Earlier, perhaps, there will be cucumbers from Mars or fuel from the Moon. If we want to see such innovations, we must not only reach the surface of these planets, but also arrange agricultural systems, mining, production, regular food supply, and of course, comfortable living space for the personnel there.

Let’s imagine that the issues at the beginning of exploring the nearest planets are already sufficiently resolved and there are two crew members who will be sent to the Moon and to Mars. On the Moon there will be built an intermediate base for deep-space missions, and the implementation of the terraforming, hydration production, and gardening programs will begin on Mars.

Among other difficulties such as budgets, training, flight, weightlessness, oxygen, etc, we will be faced with two major challenges: radiation safety and protection against meteorites. Without solving these problems neither Moon nor Mars colonization is possible. It is believed that an astronaut can spend only three days on the Moon before he will receive a lifetime radiation dose limit according to current standards. So, the astronaut needs to gain the maximum benefit from these three days, building a livable, meteorite-countering habitat designed for a team that will fly there after him. These structures must be lightweight, durable, easy to use, and preferably universal (usable to satisfy different needs).

Now “space architecture” must be considered as a separate, important, and practical area of science. NASA’s Lunar Architecture Group has already established requirements for housing astronauts on the Moon – it must be energetically autonomous, mobile, with a closed-loop life support system. The first group of lunar settlers should be about 20 people. Some information on Moon exploration can be seen here.

While no project has yet been adopted to develop fully, there are some famous designs. These include the geodesic dome designed by the American engineer B. Fuller, inflatable structures by P. Gerryava (Finland) and by D. Pyurveev (USSR), the pyramid by O. Poyzel (Germany), and the designs of cable-stayed networks by Makarov (Russia – Latvia). These last structures we will discuss in more detail.

A cable-stayed network is “a network formed by intersecting cables that is the main support system of cable-stayed coatings.” Such networks usually play a role of supporting structures in the roofs of many of sports and public buildings. 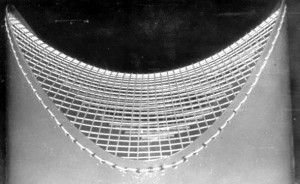 Early on, Konstantin Tsiolkovsky recommended that we pay attention to cable systems during the construction of future settlements. As it turned out, from such a system of flexible cables we can create durable, rigid, and relatively large structures. Engineer Sergey Makarov in 1983 seriously addressed the problem (or rather the task) to create multifunctional, lightweight, strong, and most importantly, cheap structures — which are suitable for construction in space of multi-storey hotels, hangars, greenhouses, antennas, and so on.

According to Makarov, the main property of the designs he creates is the “balance of forces.” All his designs are the harmonious union of compressed and stretched elements – with the “play of forces” fully closed entirely inside the design. The elements can take various forms depending on the size and curves of the support contour (the grid itself gets its form from the “minimal surface” of a given contour), hence the designs could be used on surfaces with different terrain relief. Examples of networks for uneven surfaces can be seen here.

Structures based on Makarov’s networks could be easily joined horizontally as vertically (see Fig. 1). As such they provide a very valuable basis for construction of long-term space settlements. 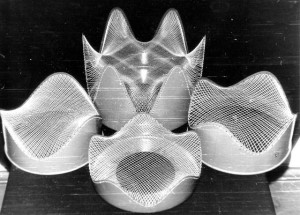 Fig. 3 Some other cable-stayed networks by Sergey Makarov (“Trojka”, “Quartet”, “Five” and “Six”)

You can see how Makarov’s “Trojka,” “Quartet,” “Five,” and “Six” look in Fig. 3. Some other structures based on Makarov’s networks could be seen in Fig. 4, 5, 6. Engineer Makarov demonstrated examples of the construction of new cable-stayed networks in this presentation.

Makarov also answered some questions from the website “Ask the Science”: Is it realistic to use your modules not only for the construction of space hotels, but also for other space needs?

– In space my structures could be used, for example, as a basis for the creation of transmit-receive antennas, to create solar reflectors, space sails, networks for catching debris, etc. 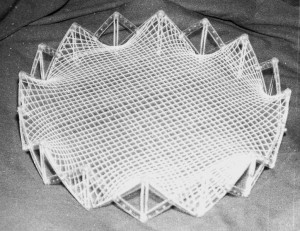 Assume that the astronauts arrived on Mars. They begin to explore it for the possibility of growing simple crops. They need to build a greenhouse. Would they be able to construct these cable-stayed nets manually or using mechanisms? Or do they need some special training or sophisticated tools to create the desired shapes?

– To manually collect them is quite simple: you need only comply with the schemes of woven ropes (see, for example, schemes of Trojka, Quartet, Five, Six in the “Space Architecture” chapter). Small structures can be assembled by hand, large – using some hoists. After the erection on Mars of the cable-stayed coverage, it is desirable to seal the grid into transparent plastic epoxy resin. Such self-hardening space resin has long been developed by the firm Hughes Aircraft Company. After that you have to build walls and to provide tightness of construction for plants to grow in the gas medium they need. However, I think that on Mars it will be better to use a ready-made roll-away structure, for example, like this (see Fig. 7).

If astronauts on Mars will need a lot of greenhouses, stadiums, etc., it is better for them, of course, to learn to build them on Earth. To create buildings on other planets may use another approach: assembly of domes from small cells with my cable-stayed nets, which were sealed with transparent plastic (see Fig. 8). 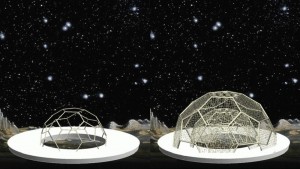 How can your cable-stayed coverages be used here and now on Earth?

– Basically, as I understand it, on Earth they will be used as a lightweight pavilions, greenhouses, mobile scenes, circuses. Fig. 9 is one example of such a construction. Military men apparently will apply my structures for antennas, for camouflaging ground objects, but their main application I see in various space structures.

Is it true that in the course of work on the cable-stayed structures you discovered a new law in statics? – Yes, in 1989 during the process of generalization, in my experience of creating cable structures from convex-concave cables, I discovered “the law of compatibility of quasi-orthogonal tangentially-undulated cable-stayed networks.” I think it is a “pioneering discovery” (we have not had such a universal breakthrough before) and it opens a new constructive direction, based on which, in the future, perhaps, a whole new architecture of the cosmos may be developed. 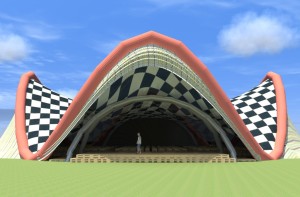 This law belongs to the discipline of fundamental (theoretical) physics, within the  area of mechanics, in particular, statics. Prior to me, during 2,000 years no new discoveries were made (leading to the uniqueness of my discovery). All my cable-stayed structures are inventions, which are made on the basis of this discovery. Supposing this law was not discovered by me, I could not guarantee that the network will converge without stratifications for any given number of waves on the support contour. But now I can guarantee it! Due to my law in all my models all intersecting cables have tight contact in all the nodes of their mutual intersection.

Unfortunately, the Russian Academy of Sciences does not allow the notion of a discovery made by a single individual. Their norms of consideration concerning discoveries demand that the author was working in a science institution and must attach “the conclusion of the Scientific Council with the seal of Institute” to their statement for opening. That is why after making my discovery, I outlined my law with the norms of patent documentation and registered it with the notary to ensure my global priority to it (see Fig. 10). 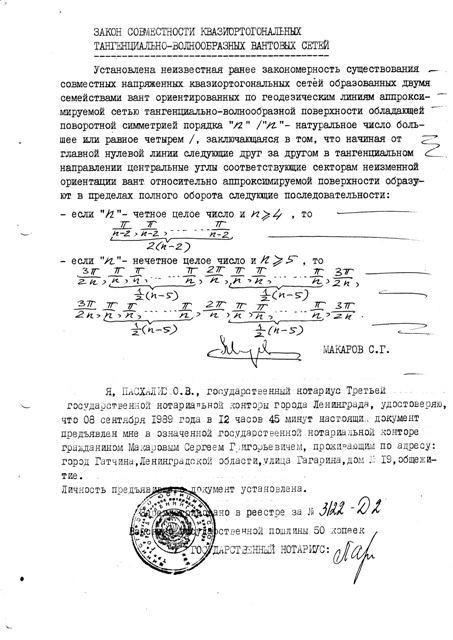 Fig. 10 The law of compatibility of quasi-orthogonal tangentially-undulated cable-stayed networks by Sergey Makarov

April 13, 2011, I sent to the Russian Academy of Sciences my application and the other documents for the recognition of my law as a discovery. From the Academy there has not been any reaction to my statement till now.

More details about “the law of compatibility…” can be found on the author’s personal website.

Sergey, you’re talking about your discovery, but you told us that the discovery was not recognized by the Academy of Sciences and was not registered. What gives you reason to consider your law a “discovery in statics”?

– In 2013, I wrote in English the article “Discovery in Statics” and sent it to the world’s most authoritative scientific journal on mechanics, “World Journal of Mechanics.” This journal checked my information during 2 months. As a result, the journal published my article Discovery in Statics and is now sharing it amongst various media. Anyone can read the article here.

As far as I know, the criteria of this journal are very strict. Namely the recognition of my discovery by this journal serves me as a “basis for optimism.” Furthermore, from the theory of patent knowledge it is known: each discovery always is “the field for following inventions”, so if on the basis of “alleged discovery” began to emerge some inventions – the opening really exists. With the help of my discovery, for example, I can “infinitely invent” new cable-stayed coverages. Anyone can verify this after viewing the page I created “Space Architecture” at the English encyclopedia «Wikimedia Commons».

Therefore, in conclusion it should be added that, according to the Journal of Harmonized Research in Engineering the principle of construction of Makarov’s cable networks can be the basis for creating a huge space platform. On such a platform, a solar reflector could be placed that directs concentrated sunlight to the asteroid Apophis in order to change its trajectory. This will prevent it  from colliding with Earth in 2029.

By Olga Bojko with translation by Sergey Makarov. This article was originally published by Ask the Science; it has been reposted in translation with permission of the author and editor. Anyone can view the lecture of Sergey Makarov (in Russian) in the Southern Federal University (Rostov-on-Don, Russia), “Makarov’s cable-stayed networks for terrestrial and space architecture,” in the video below: