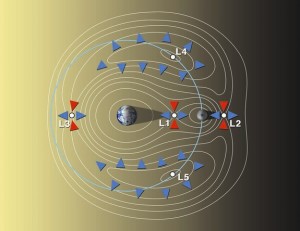 The Lagrange points for the Earth-moon system. NASA is evaluating an early mission with a small station placed at Earth-moon L2 (Credits: David A. Kring, LPI-JSC Center for Lunar Science and Exploration).

One of the leading projects proposed by NASA for the agency’s next mission is the construction of a spacecraft which would hover above the far side of the moon in a location known as the Earth-Moon Lagrange Point 2, an area where the combined gravities of the Earth and moon reach equilibrium.

“Placing a spacecraft at the Earth-Moon Lagrange point beyond the moon as a test area for human access to deep space is the best near-term option to develop required flight experience and mitigate risk,” a recent NASA report concludes.

The crew of such an outpost could run missions like the study of nearby asteroids or the sending of robots to the moon with the aim of collecting rocks and bringing them back. The outpost could also be a potential gateway for manned missions to Mars or one of its moons. A purpose would be finally given to the Orion space capsule and the Space Launch System rocket which are currently being developed.

The funding of the project remains one of the major concerns. Due to deficit reduction initiatives across the US federal government, it is unlikely that NASA can get more in coming years than its current budget of $17.7 billion. Strong White House backing would be required to convince Congress to finance building of the outpost.

A second concern is astronaut safety. How NASA would address the dangers of deep space and radiation is not known. Neither do we know how astronauts could be rescued if something goes wrong. Orbiting at 446,000 km from Earth, the outpost would be far more remote than the International Space Station and it would take days to get back to Earth.

A first flight of NASA’s Space Launch System is planned for 2017. According to NASA planning documents, the construction of the outpost could begin two years later in 2019.