It is one of the most unlikely ways to die, but the history of alleged cases suggests that it can happen from time to time!

Supposedly, tens of thousands of people were killed during the Chíing-yang meteorite shower in the Shansi province of China between April and May of 1490. Modern researchers are generally skeptical about the number of fatalities, which cannot be corroborated among the multiple records of this event, but the figure is consistent with what we might expect had the well-documented Tunguska event of 1908 occurred over a densely populated urban area.

Researchers are skeptical of other deaths attributed to meteorites, such as the death of a Franciscan friar in 1633, the deaths of two sailors in the Indian Ocean in 1647, and the death of an Indiana man in his bed in 1879. The 1800s were a time of elaborate hoaxes staged for maximum press coverage, so researchers take a dim view of most spectacular accounts from the 19th century where no other people geographically nearby seem to have observed anything out of the ordinary, such as in this next story.

On March 10, 1897, in Martinsville, West Virginia, a meteor exploded over the town. This was announced in a front-page New York Times article published on March 11, 1897:

“A meteor burst over the town of New Martinsville yesterday. The noise of the explosion resembled the shock of a heavy artillery salute, and was heard for twenty miles. The cylindrical shaped ball of fire was forging along in a southwesterly direction when first discovered. The hissing sound of the fire could be heard for miles, and the smoke gave the meteor the appearance of a burning balloon.

When the meteor exploded the pieces flew in all directions, like a volcanic upheaval, and solid walls were pierced by the fragments. David Leisure was knocked down by the force of the air caused by the rapidity with which the body passed, before it broke. The blow rendered him unconscious. One horse had its head crushed and nearly torn from the trunk by a fragment of the meteor, and another horse in the next stall was discovered to be stone deaf.

The coming of the meteor was heralded by a rumbling noise, followed in an instant by the hissing sound, and immediately the ball of fire, spitting and smoking, burst into full view, and before the people had time to collect their senses, the explosion occurred.”

In the 20th century we have a series of reports that should be verifiable, at least in principle, but have not been as yet.

The Hsin-píai-wei meteorite of 1907 allegedly killed Wan Teng-kuei’s entire family, who were crushed to death, possibly from the collapse of their house after impact. Then, according to an article in The New York Times on Dec. 8, 1929, a wedding party in a small town in Yugoslavia was struck by a meteorite, with one person being killed. Finally, on Aug. 15, 1951, 62 houses were destroyed in Tehran, Iran, by a meteorite shower. Twelve people were killed and 19 injured. In addition, 300 livestock were killed. The event was reported by Iranian newspapers and the United Press and is reported to have been published in the Lowell Sun of Massachusetts. Why didn’t The New York Times carry it, given the devastation?

For some reason, meteorites seem to have an affinity for automobiles!

The first documented case of a car being struck by a meteorite occurred on Sept. 29, 1938, in Benld, Illinois. A meteorite crashed through the roof of a garage; struck the car; penetrated its roof, backseat, and floorboards; bounced off the muffler; and finally lodged in the cushions of the seat.

Another famous encounter between a car and a meteorite happened on Oct. 9, 1992, in Peekskill, New York. The fireball from the 22,000-pound meteorite was seen streaking across the sky as from as far away as Kentucky. A fragment of the meteorite weighing 26 pounds struck the car of Michelle Knapp and tore a hole through her trunk. The Chevy Malibu was sold for $69,000 and is now in a museum.

The only injury accepted as having been caused by a meteorite in the 20th century occurred in Sylacauga, Alabama, on March 30, 1954. Mrs. “Annie” Hodges was taking a nap on her sofa one afternoon when she was awoken by an explosion. She then noticed that she was seriously bruised on her left hip, abdomen and arm. An 8-pound meteorite had crashed through her roof, bounced off a radio, and hit her. The incident was picked up quickly by the press and heavily photographed.

The most publicized and researched event of them all was the famous Chelyabinsk meteor in Russia, which, on Feb. 15, 2013, injured an estimated 1,500 people! About 112 people were later hospitalized, two in serious condition. They had been severely injured by flying glass as they watched the bright daytime light detonate, producing a powerful shock wave that damaged about 3,000 buildings. Had the 10,000-ton meteor detonated over London, Paris or New York, the injuries from flying glass would have been in the hundreds of thousands, and plausibly there would have been many fatalities. Again, as in the 1908 Tunguska event, we got lucky. 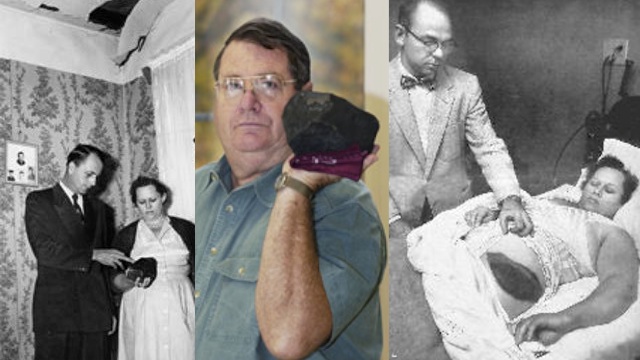 In 1954, a meteorite crashed into a house, and hit a sleeping woman in Alabama, USA. credits: io9

The average global population during the 20th century was about 4 billion. Let’s suppose that all the alleged deaths by meteorites are reliable, so there were about 20 people killed over the course of 100 years. This means the death rate is about one person in 20 billion per year. In your 80-year lifespan, you have a one-in-250-million chance of being killed by a meteor. The problem is that you can be in your house, at a wedding, or just about anywhere else and it doesn’t matter. You might as well go outside and admire the next meteor shower.