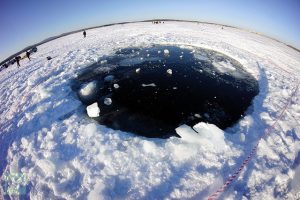 The hole found on the frozen surface of Lake Cherbakul, on February 15 (Credits: RT.com).

The United States and Russia have decided to join forces to improve protection against meteorites and other space threats. The decision to cooperate in case of cosmic emergency was the result of a joint Russia-US meeting held in Washington, on June 25.

Although the meeting was originally planned to cover all kinds of natural emergencies, such as the recent extreme and sometimes catastrophic weather in the U.S. and Russia, the cooperation against space threats got major attention at the news conference. According to Puchkov, with the supervision of FEMA and Russian Emergencies Ministry, a technological breakthrough in the field of protection from cosmic impacts is possible. Puchkov also stated that the supervision of the two emergency management authorities will attract the finest minds and research groups from all over the world.

After the explosion of a meteor over the Russian city of Chelyabinsk on February 15, the world suddenly realized asteroids are not only material for movies. Although the space rock exploded into pieces at an altitude of about 5 to 10 kilometers, the blast wave shattered windows and damaged buildings in the Chelyabinsk region, with over 1500 people requiring medical assistance.

A huge fragment of the Chelyabinsk meteorite was tracked to the bottom of Chebarkul Lake where, just after the event, an 8-meter hole was found on the iced surface. Eyewitnesses observed a massive jet of water sent into the air shortly after the explosion and a small meteorite fragment was found on the ice. Therefore, the researchers were brought to believe that a meteorite chunk could have been the cause. Following probe inspections and measurements of the magnetic field, Viktor Grokhovsky, a senior researcher with the Urals Federal University, announced on June 22 that a meteorite fragment about 60 centimeters in diameter and weighting approximately 300 kg is lying on the bottom of the lake.

Below, video taken on February 15 on the Russian lake where divers began hunting for a meteorite chunk: