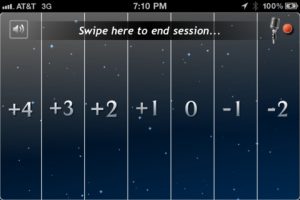 A screenshot capture from the Meteor Counter app. (Credits: iTunes).

The Meteor Counter, a new iPhone app, allows skywatchers everywhere to help monitor the nearly 40 tons of meteorites that reach Earth’s atmosphere every day. Users of the app record meteorite sightings with a simple tap on a brightness scale screen. The data is transmitted to NASA for analysis.

“We developed the iPhone app to be fun, and informative, but also to encourage going outside to observe the sky,”  says Bill Cooke of NASA’s Meteoroid Environment Office, which sponsored the project. “Our hope is the app will be useful for amateur and professional astronomers – we want to include their observations in NASA’s discoveries – and have them share in the excitement of building a knowledge base about meteor showers.”

The app is available just in time for citizen scientists to monitor the Geminid meteor shower, the remnants of a passing shattered asteroid visible for a few days every December. 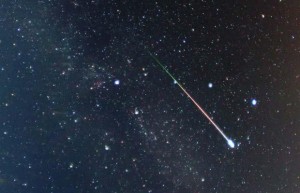 Photograph of a meteor from the 2009 Perseids meteor shower. (Credits: Pete Lawrences/National Pictures).

Meteorites include everything from cometary dust that burns up in the atmosphere creating a very dim light, to full blown meteors that survive atmospheric entry and land on Earth’s surface. Meteor shower watching is a popular form of amateur astronomy due to the spectacular appearance of the “fireballs” that appear to shoot across the sky.

The app is being offered free of charge to encourage participation. The app will also issue alerts for known meteor showers so observers can ensure good viewing.

The video below explains how the app will help NASA map meteor events.