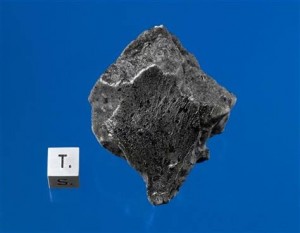 A Tissint meteorite collected from Morocco and now part of the Macovich Collection. (Credits: Darryl Pitt/AP).

It turns out that a meteor shower that dropped several small rocks in Morocco originated from Mars. The meteor shower, which was witnessed by several observers and has since been named Tissint, took place in July 2011. An expert panel of scientists has just confirmed to the AP that the meteorites do indeed come from Mars.

“It’s a free sample from Mars, that’s what these are,” said University of Alberta meteorite expert Chris Herd, who heads the committee that certified the discovery. Although other Mars meteorites have been found on Earth, these rocks, located in December 2011, were found closest to the time of landing, meaning they are less contaminated with Earth microbes and dust and more useful for scientific research. So far no spacecraft has returned a sample from Mars, so these remnants are the only physical samples available for scientists to study.

Most of the Tissint meteorites have been purchased by dealers and collectors at this time. The largest rock weighs over 2 pounds. The last known time a fresh Martian rock fell to Earth was in 1962.This is only the fifth time a witnessed meteor landing turned out to originate from Mars.

The hazards from meteorites making Earth fall are difficult to quantify, since many reports of damage and injury turn out to be due to non-meteorite projectiles. Generally 99% of meteorite composition burns up in Earth’s atmosphere on entry, so meteors pose much greater threats to spacecraft such as the ISS.