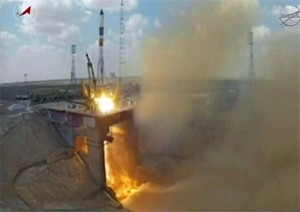 At 10:21 GMT on April 24, the Progress M-19M cargo vessel launched from Baikonour Cosmodrome aboard a Soyuz-U. The launch went off without a hitch, but once in space, one of the antennas used for the KURS automated rendezvous system failed to deploy.

According to RussianSpaceWeb, two attempts to deploy the 2ASF-VKA antenna have already failed. If the antenna cannot be extended, the vessel will continue as usual until it comes within 200 m of the station. Then Expedition 35 crew will need to maneuver the vessel in by remote control. As of the latest available information, Progress M-19M is still scheduled to dock with ISS on April 26. Unlike the prior few launches, this craft is taking the traditional two day route to the station, rather than the newly qualified six hour run. The shorter trip requires more precise alignment with the station at time of launch, and Progress M-17M had to be rescheduled from its original launch date to accommodate the BION-M mission. BION-M launched on April 19 carrying a small zoo of creatures, including mice, gerbils, and geckos. The critters will orbit for 30 days before being returned to Earth for study.

When it arrives, the Progress will dock at the Zvezda module, delivering 2.5 tons of supplies, including propellant, oxygen, air, water, and spare parts. It also carries a new Russian treadmill.

On April 15, Progress M-17M departed from the station, freeing up its spot on Zvezda for its successor. Progress M-17M reentered the atmosphere on April 21, landing in the Pacific Ocean. The next Progress launch is currently scheduled to take place in July.

Below, video of the Progress M-19M launch: