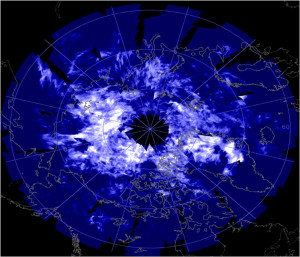 Polar Mesospheric Clouds from the Aeronomy of Ice in the Mesosphere Cloud Imaging and Particle Size instrument (Credits: NASA).

You might have observed them in the summer months during twilight and perhaps pondered what those tenuous pale blue gently fluorescent clouds high up in the sky actually are. First observed in 1885, two years after the explosion of Krakatoa, the polar mesospheric clouds (PMC), sometimes called noctilucent, have long remained a mystery.

In the past decade, researchers have found that spaceflight could actually contribute to the formation of these clouds, with the already terminated Space Shuttle program being the biggest contributor.

Why exactly the Space Shuttle? “Because the shuttle exhaust produces a lot more water than anything else that flies,” says David Siskind, a researcher from the US Naval Research Laboratory, who has recently finished a study about the connection between post-shuttle spaceflight and increased formation of polar mesospheric clouds.

Composed of tiny ice crystals at the altitude between 76 and 85 kilometers, the polar mesospheric clouds are the highest occurring clouds in the Earth’s atmosphere. As the mesosphere is usually extremely dry, the source of the water to form these clouds was a scientific puzzle.

And this is where spaceflight comes in. Whereas some theories expect PMCs to form from water which is  transported into the mesosphere from below, the Space Shuttle provided an additional abundant water supply  from above. “The space shuttle used to release the water from its main fuel tank at 110 km and these clouds are at 82 km,” Siskind explained.

The released water then descended quickly from the thermosphere to the colder mesosphere and travelled infallibly towards the Polar Regions where it displayed in the form of shiny polar mesospheric clouds shortly after every launch of the Space Shuttle.

However, with the Space Shuttle program put to rest two years ago, researchers were curious how the dynamics guiding the formation of the polar mesospheric clouds have changed since. The timing for a study seemed quite right as the awakening solar activity should have dried the already dry mesosphere, changing the initial combination of contributing factors.

“We thought that increased solar ultraviolet radiation would lead to fewer clouds because it would slightly heat the region and break up some more of the H2O molecules. Apparently other effects are swamping this out,” Siskind says about findings of a study published in the June issue of Geophysical Research Letters.

“We have learned that the temperature of the summer mesosphere is coupled in a complicated way with the stratosphere in the opposite hemisphere. This is one of the salient new results in middle-atmospheric science in the last decade termed ‘teleconnections,’” Siskind says, explaining that the phenomenon works similarly to the El Niño effect in the Pacific Ocean decreasing the number of hurricanes in the Atlantic.

But after 2010 -2011, the data seemed not to fit the expectations. Despite the Sun being more active and no Space Shuttle being around anymore, the number of polar mesospheric clouds visible from NASA’s Aeronomy of Ice in the Mesosphere (AIM) satellite wasn’t dropping but increasing.

The researchers arrived at the conclusion that there must be some additional source of water triggering the creation of the clouds. The only possible culprit was again spaceflight. Despite not releasing such a huge amount of water in one splash, the exhaust of various launch vehicles seems to offset the missing Space Shuttle water.

The question comes to mind whether these clouds could have any effect on the Earth’s climate, perhaps similarly to their stratospheric counterparts that provide the right environment for fluorocarbons to trigger ozone damaging reactions.

“They may be indicators of changes, but do not cause changes,” Siskind reassures. Quite on the contrary, the clouds can help scientists to better understand how wind behaves in such high altitudes, the main gap in current circulation models. “Since these models are similar to those used to simulate things like climate change and space weather, it’s important that we get them accurate,” says Siskind. “Plus, understanding the solar cycle is important for all of atmospheric science. If we’re not seeing a solar cycle effect at the summer mesosphere, then that needs to be looked into.”

According to the researchers, the upcoming years, with more time passing since the last Space Shuttle flight, will show how much current spaceflight contributes to this spectacular phenomenon.

Watch a timelapse of polar mesospheric clouds, below: