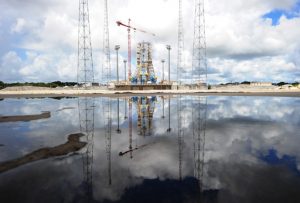 Final preparations are underway for the December 16 launch of Soyuz from the French Guiana Space port in Kourou. It will be the second time  French launch provider Arianespace launches a Russian-made rocket.

The first Soyuz in history to be launched outside the former soviet territory took off from Kourou at the end of October 2011. This event marked the beginning of a cooperation that both parties consider to be promising. Arianespace has not only gained a medium sized launcher in it’s portfolio but also the opportunity to launchthe world’s longest serving rocket.

This time, the vehicle’s task is to place 6 satellites into  Low Earth Orbit. One of them is the Pleiades 1 Earth observation satellite that has already been installed on the top of the Fregat upper stage in the Spaceport’s S3B clean room facility. 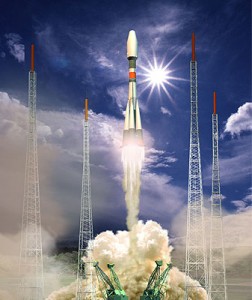 As part of ongoing preparations, the basic build up of the launcher has already been completed with the mating of the Block 1 third stage.  Soyuz is now getting ready for its rollout to the launch pad were the payload carrying Fregat upper stage will be connected.

Also underway in Kourou are preparations for the first historical flight of Vega which is supposed to take place in January, as well as for the next heavy-lift Ariane 5 launch scheduled for March 2012. Ariane’s task will be to carry the third Automated Transfer Vehicle, the unmanned spacecraft designed for resupplying the ISS.

The following video explains the Russian cooperation with the Kourou Spaceport
[youtube http://www.youtube.com/watch?v=twk2KRPVwvk]