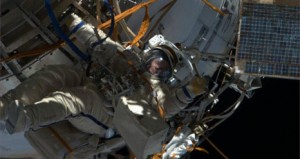 On April 19, cosmonauts Pavel Vinogradov and Roman Romanenko conducted a nearly seven hour extravehicular activity (EVA) outside the International Space Station (ISS). The spacewalk involved installation and retrieval of experiments and installation of a navigational aid needed for the upcoming ATV-4 mission.

Vinogradov is a veteran spacewalker; this was his seventh foray and a record making one. Vinogradov is now the world’s oldest individual to conduct an EVA, at age 59. This was Romanenko’s first EVA.

The only mishap of the activity occurred just at the end of their final task. Vinogradov removed a panel from the Vinoslivost Materials Sample Experiment outside the Poisk module. Before he could secure the panel with a tether, it slipped out of his grasp. NASA reported that the 3 kg, 45×30 cm panel has little likelihood of striking ISS due to its apparent trajectory. There is one more panel still to be retrieved from the same experiment, so some data may yet be recovered. The first panel unfortunately joins the population of low Earth orbit space debris, at least until it encounters enough drag to reenter the atmosphere.

Vinogradov and Romanenko successfully installed a new experiment, Obstanovka, to measure the effect of space weather on the ionosphere and retrieved Biorisk – an experiment studying the effects of microbes on spacecraft – from outside Pirs.

The most critical activity of the EVA was the replacement of a faulty retro-reflector device on Zvezda. These devices help the European Space Agency’s robotic Automated Transfer Vehicles (ATV) dock with the station on supply runs. ATV-4, named Albert Einstein, is slated to make a visit sometime in June.

This was the first of six Russian EVAs and two US EVAs scheduled for 2013.

Below, footage from the beginning of the EVA: