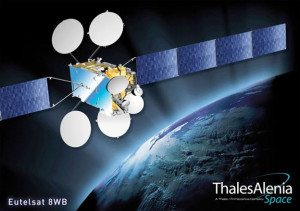 Artistic rendition of the EUTELSAT 8 West B satellite, courtesy of Thales Group

Paris-based commercial satellite fleet operator Eutelsat Communications recently announced plans to deploy an experimental cutting-edge TV channel interference mitigation function for the first time on its upcoming EUTELSAT 8 West B satellite. The satellite is scheduled for launch in 2015 and will be stationed over the Middle East and North Africa where Eutelsat has suffered deliberate jamming of its satellites by third parties, organized to prevent reception of international Farsi channels including BBC Persian, Voice of America, and Deutsche Welle since May 2009. The anti-jamming function will further raise the bar of signal security by increasing control over uplink frequencies to the satellite, a method for mitigating deliberate interference.

“This function involves embarking new-generation frequency converters behind the satellites Receive antennas,” reads Eutelsat’s press release. “This will put Eutelsat in the unique position to be able to change the frequency of an uplink signal without any impact on the downlink frequency received by user terminals, marking a major breakthrough in the bid for continuity of service for broadcast signals jammed by rogue uplink signals.”

Recent examples of TV channel interference in the Middle East and in East Asia have featured satellite channels and service providers well equipped to curb passive jamming. However, intentional jamming has affected Middle East operators, increasingly and significantly, since 2009 when political unrest broke out in Iran, exacerbated in subsequent-year Arab spring breakouts. During those intervening years, Eutelsat, as well as Egyptian satellite company Nilesat and the Arabsat consortium based in Saudi Arabia, filed multiple complaints with the relevant French and international regulatory authorities to denounce hostile jamming operations and to prompt the International Telecommunication Union Radio Regulatory Board, a United Nations Agency, to rule these to be cases of illegal interference.  Unfortunately, those complaints have had no real effect. Eutelsat says the Arab Spring-related hostile satellite jamming practice is serious enough to threaten their business by having a material effect on their revenue.

Deliberate jamming prevents satellite reception, creates collateral damage for other broadcasters and is contrary to international conventions for the use of satellites. Efforts to combat it are a priority issue for Eutelsat because modern broadcasting satellites aggregate broadcast channels in a ‘multiplex,’ meaning hostile jamming of one channel could quickly affect other channels. Recent sharp rise in deliberate broadcast satellite interference has given greater urgency to the search for solutions. For example, Eutelsat reported 340 cases in the first 10 months of 2012, a threefold increase overall since 2009.  Of these incidents, the satellite operator traced 90% of hostile signals to Iran and Syria.

Eutelsat’s decision is the first concrete jamming mitigation step to be taken by a satellite operator, breaking the telecommunications taboo that commercial operators in general are not early adopters of new technologies. The new anti-jamming technology development is within the framework of ESA’s multi-year ARTES telecommunications research program, and a similar CNES effort dubbed FLIP, or Flexible Payload program, to enable satellite operators and broadcasters to skip from frequency to frequency on the uplink signal, escaping an interference signal. The technology is now entering the final qualification phase as part of ESA’s new initiative called the Flight Heritage Program, also known as ATLAS, launched in November 2012, to facilitate the transfer of promising innovative satellite technologies to flight hardware.

“This de-risks the project for the commercial customer, and this is the real advantage of ATLAS,” one industry official said. “The original work owes mainly to the CNES Flip program, but it’s ATLAS that has given us the extra push needed to win commercial operator approval by helping us go beyond the production of a mechanical test model to the proto-flight model. That makes all the difference.”

In a Jan. 23 interview, Eutelsat’s chief development and innovation officer Jacques Dutronc commented on Eutelsat’s interest in applying the new feature to many of its satellites.  He said the enhancement is relatively cost effective compared to deploying similar anti-jamming and signal-nulling technologies long used aboard military telecommunications satellites. On the insurance front, Dutronc said the new function should not pose any special issues to Eutelsat’s insurance underwriter because the technology is not mission-critical.

If the technology works as designed, more broadcaster and satellite operators may adopt the new technology, especially those who operate in regions like the Middle East and North Africa where deliberate satellite jamming has been a growing problem. While the cost of anti-jamming technology up to now has been prohibitive, ESA’s co-financing ATLAS program with industry should facilitate deployment of the new technology on future satellites.