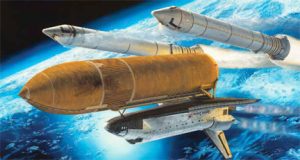 KSC is preparing to burn out the remaining Shuttle Booster Separating Motors, not to be confused with their bigger cousins, the Reusable Solid Rocket Motors (Credits: ATK).

At the end of February 2013, NASA will detonate the last Shuttle Booster Separating Motors (SBSMs) at the Kennedy Space Center (KSC) in Florida, concluding Shuttle Transition and Retirement Program activities.

“It’s not going to make a big boom,” said Anthony Tripp, a professional engineer with Florida’s Department of Environmental Protection.  “Just like a shuttle launch, all that’s going to be left is some gases that are not hazardous. They burn off very quickly.”

Russell Romanella, KSC’s director of safety and mission assurance, has confirmed Tripp’s assertion, assuring that “this operation poses no risk to KSC personnel or property, nor has there been any risk to public safety,” since NASA “have vented and burned over 50 of these (BSMs) over the last few years, [..] all of those and the current set have been vented and burned in a safety controlled area.”

SBSMs are relatively small rockets,  weighing 80 kg and 78 cm in length, that separate the reusable solid rocket motors from the shuttle before it leaves the atmosphere. The 16 SBSMs mounted on the Shuttle, eight for each solid reusable booster, burn simultaneously for 1.2 seconds, in conjunction with the release of the motors from the External Tank (ET). ATK Launch Systems Group, part of Alliant Techsystems (ATK) Inc., produces the SBSMs in Brigham City, Utah

At the moment, SBSMs are not a real danger, but their disposal is necessary because perchlorate crystals form outside and inside of the motors. Perchlorate is a reactive oxidizer that can explode upon exposure to heat or when improperly stored in large quantities. As a result, the material does not travel well and must be destroyed in situ.

NASA officials requested a Florida Environmental Authorities special permit, on Dec. 20, to be executed at KSC’s landfill off Schwartz Road, where the 45th Space Wing Explosive Ordnance Disposal Unit will place a quarter pound of C-4 explosive on both sides of the motors. Most probably, said NASA officials, 28 SBSMs will be burned, while the remaining will be used for future programs.