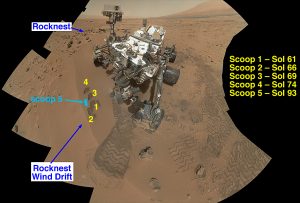 The “scoop” locations for soil analyzed by Curiosity (Credits: NASA/JPL/Caltech/MSSS).

Ever since a fateful interview on November 20 with the enthusiastic principal investigator for Curiosity, John Grotzinger, the world has gone Mars-mad. Everyone who’s ever looked up at the stars has been itching to know what could be the “one for the history books,” Grotzinger described and jumping to the conclusion that it must be signs of life. Meanwhile, every public relations staff member at NASA has been pulling their hair out trying to tamp down the expectations in a vain attempt to prevent the universal disappointed that inevitably followed: on December 3, Curiosity scientists revealed the “historic” data. And it sounded like a lot of scientific gobbledygook. Now, there is no question that detection of life on Mars would be historic, but Curiosity isn’t precisely looking for life and is still pretty far from the most likely location of prehistoric bacterial remnants. Beyond those pesky details, many people seem to have lost sight of the more fundamental truth: Martian life is not the only discovery of worth waiting to be found on the Red Planet. The entire Curiosity mission is pretty historic when it comes down to it: it is enabling us to investigate the Martian surface and subsurface in ways we never have before. And for those scientists interested in scientific gobbledygook, today’s data release was pretty heady stuff. 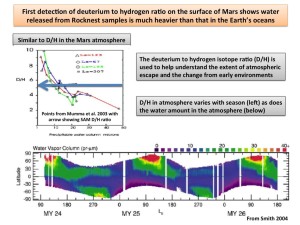 Deuterium/Hydrogen ratios of Martian soil were measured for the first time ever (Credits: NASA/JPL/Caltech/GSFC).

For the first time, we have Deuterium/Hydrogen ratios measured from the surface of Mars rather than approximated from orbit. D/H gives an indication of how much hydrogen – and water – may once have existed on a planet. It is a key datapoint to be considered in constructing a viable theory of planetary evolution and one that helps us understand how Earth came to be as we know it today. Curiosity’s SAM instrument suite – Sample Analysis at Mars – also turned up some organic compounds, a term that NASA seems to be avoiding or explaining ad nauseum in its press releases, trying to keep those ubiquitous members of the public from running amok claiming there are pesticide-free vegetables growing on Mars. 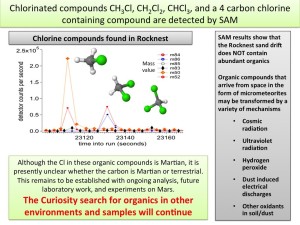 Chlorinated organics found by Curiosity in Martian soil are just the beginning in a long process of discovering exactly what the rover has found on its new home (Credits: NASA/JPL/Caltech/GSFC).

Any indication of organic compounds on a foreign body are always suspicious; afterall, organics have so permeated every nook on Earth that it is truly impossible to completely purge them from any spacecraft built here. No scientist in his right mind is going to hang his professional hat on organic compounds found in the first real test of Martian soil; he’ll hold his breath waiting for the second, and third, and fiftieth such test. Then, it might start to look like the real deal. Science is not built on eureka moments. In planetary exploration, most every discovery will be obsessed over, analyzed, tested, questioned, rejected, and reanalyzed. Good science proves itself over time. And that’s what Curiosity is doing: sampling some run-of-the-mill Martian soil, running all the analyses it can, repeating those steps again and again to see if the results match and make sense. And the really historic bit is: so far, they do! You don’t have to take my word for it. Listen closely to this excerpt from the presentation the Curiosity team made to the few members of the American Geophysical Union who weren’t elbowed out by reporters: