As  prospects of a Mars sample return mission or even a manned mission to Mars are becoming increasingly realistic, the danger of biologic invasions from space or, on the other hand, the danger of contaminating other celestial bodies with terrestrial microbes attracts more of the scientific community’s attention.There is obviously reason to worry. There are many examples from the past when a microbe, plant, bug or mammal, virtually innocent in its original habitat, caused havoc when transferred to another continent: Think about rabbits in Australia, or recently, a germ decimating the population of North American bats. Or remember the case of the indigenous inhabitants of America who suffered extremely after encountering European diseases such as smallpox or measles.

Let’s try to imagine what would have happened, if such a newcomer into an ecosystem hadn’t represented a species coming “only” from another continent. What if it is was a completely alien organism from a different planet? NASA scientists and administrators were considering this threat as early as they started to think seriously about a Moon landing.

The Office of Planetary Protection

The Office of Planetary Protection (OPR) was established in 1967, as a reaction to the United Nations Treaty on Principles Governing the Activities of States in the Exploration and Use of Outer Space, Including the Moon and Other Bodies. This treaty binds the party countries to avoid any harmful contamination of other celestial bodies while pursuing exploration.

As no one really knew what type of microbes or bacteria could be found out there, the precautionary approach was more than recommended.  What if the Apollo astronauts returned infected by some incurable and highly contagious space fever? Or what if, on the contrary, they infected the unspoiled lunar biosphere with dangerous earthly streptococcus? It would have been impossible to learn anything about the original life on Moon, had all the collected data been modified by the contaminants. 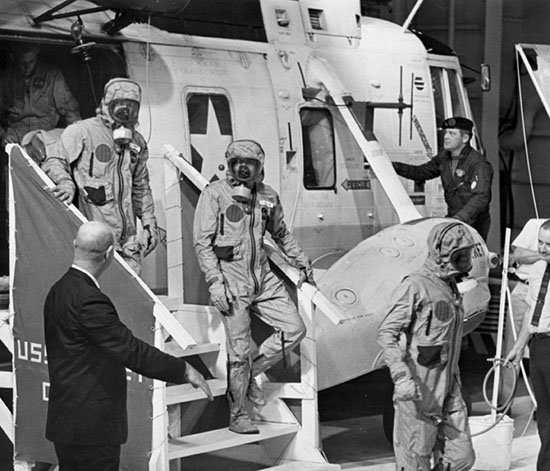 Several governmental agencies worked closely with NASA and decided that in case any harmful microorganism was brought back to Earth, it would most probably demonstrate itself within 21 days. The resulting solution was simple – a three week’s quarantine for the returning astronauts accompanied by regular medical check-ups.

But what to do with the landing module after its splash down in the Pacific? How to prevent space germs from spreading before it is transported to NASA? A super high-tech – for its time – bio container was created called the Mobile Quarantine Facility (MQF). It was carried aboard the USS Hornet Naval Aircraft Carrier to the site of the splashdown. The astronauts inside the module were supposed to put on special Biological Isolation Garments made from special material that prevented microorganisms from their bodies from entering the atmosphere. The astronauts were to breath through special respirators while waiting for the landing module to be lifted by a helicopter onto the Hornet and inside the Mobile Quarantine Facility.

Before leaving the landing module, the crew had to go through a sodium-hypochlorite shower and the module’s hatch was disinfected with betadine.  After that, all the equipment the crew and the module had touched was cleaned and sunk. Even the helicopter that had transported the crew aboard the Hornet was locked into quarantine. 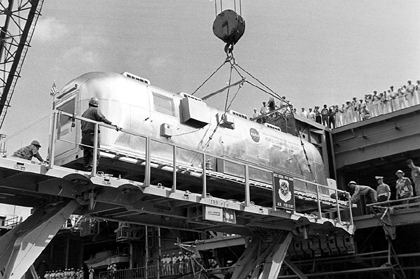 Apollo 11 crew locked up in their quaratine unit (Credits: NASA).

For the whole duration of the journey from the middle of the Pacific to Houston, the astronauts were not allowed to leave the Mobile Quarantine Facility for a single moment. It was large enough for an even bigger crew. It had a built-in lounge, kitchenette, and bedrooms. Strong negative internal pressure and an ultra modern filtration system prevented airborn particles from inside the facility from spreading around. Also stored and hermetically sealed was all the biological waste.

Upon arriving at Houston, the crew would move into another specially designed habitat – the Lunar Research Laboratory. There, they would spend another 21 days, living in an area of 7700 square meters. Together with the astronauts, all the support staff including doctors, cooks and engineers lived for these three weeks inside the facility. In case an outbreak of a space disease had taken place, the astronauts would have been treated inside the facility. 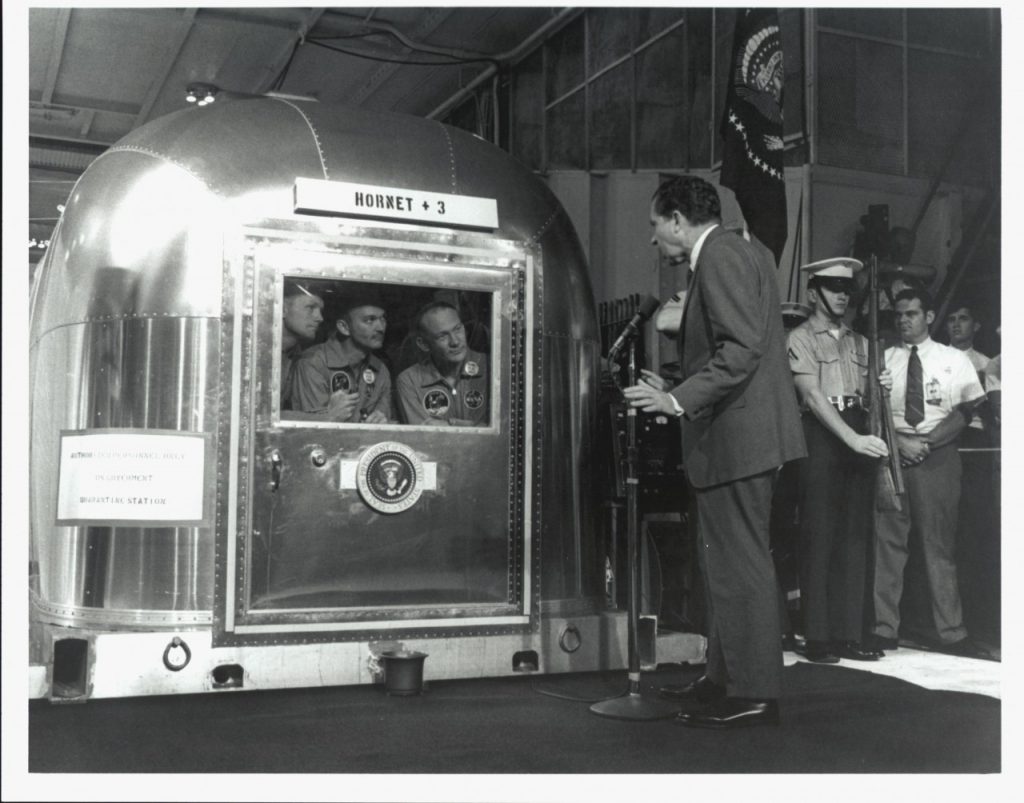