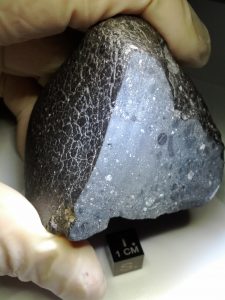 NASA funded researchers have found a meteorite from the Martian crust that contains 10 times more water than other Martian meteorites.

“The contents of this meteorite may challenge many long held notions about Martian geology,” said John Grunsfeld, associate administrator for NASA’s Science Mission Directorate in Washington D.C. “These findings also present an important reference frame for the Curiosity rover as it searches for reduced organics in the minerals exposed in the bedrock of Gale Crater.”

This particular Martian rock was found in 2011 in the Sahara Desert and designated Northwest Africa (NWA) 7034. After more than a year of study, the scientists determined that the 320-gram meteorite formed 2.1 billion years ago during the beginning of Amazonian Period, the most recent geologic period on Mars. The age is significant because NWA 7034, sometimes referred as “Black Beauty”, is older than any other Martian meteorite discovered, giving an insight into Mars’ history during a critical time in its evolution.

NWA 7034 is most likely the result of volcanic activity and it is an excellent match for the surface rocks and outcrops NASA has studied remotely via Mars Exploration Rovers and Mars Odyssey Orbiter. The rock’s composition (basalt, feldspar, and pyroxene) is different from any previously studied Martian meteorite found on Earth.

Researchers at the University of California at San Diego and the Carnegie Institution in Washington D.C. theorize that the relatively large amount of water and the different mixture of oxygen isotopes found in NWA 7034 may have originated from interaction with water present in Mars’ crust and atmosphere, respectively.