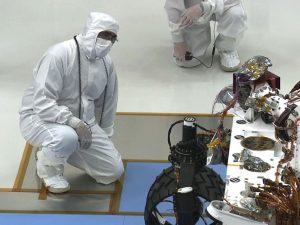 Mars Science Laboratory (MSL) Curiosity, launched by NASA on November 26, is a robotic planetary exploration mission designed to comply with Planetary Protection standards. Due to a communication mix-up, Curiosity’s drill bits deviated from these standards, without receiving proper authorization.

NASA has emphasized that the deviation will not pose any hazards to Mars or Curiosity’s mission. Catherine Conley, NASA’s planetary protection officer, noted that the Curiosity mission is designed to avoid Martian areas that could currently harbor life. “That reinforced the reasonableness of not having the drill bits sterilized, because there’s unlikely to be ‘special regions’ in the Gale Crater landing site,” Conley said according to Space.com.

The deviation occured when Curiosity’s developers opened a drill bit box and attached a bit to Curiosity’s drillhead. The original plan was to sterilize the bits inside the sealed box and have Curiosity affix the bits itself after landing. Although the bits were handled in a very clean environment and subsequently tested for organic matter, Conley’s office was not notified of the change until after the fact. “That’s where the miscommunication happened,” Conley said. “I will certainly expect to have a lessons-learned report that will indicate how future projects will not have this same process issue. I’m sure that the Mars exploration program doesn’t want to have a similar process issue in the future. We need to make sure we do it right.”

NASA’s Planetary Protection procedures are designed to avoid unintentional contamination of other planetary bodies with organic Earth matter and contamination of Earth with “space germs” from other planetary bodies. These measures are put in place to comply with the 1967 United Nations Outer Space Treaty and to meet the following objectives as outlined by NASA: “to preserve our ability to study other worlds as they exist in their natural states; to avoid contamination that would obscure our ability to find life elsewhere — if it exists; and to ensure that we take prudent precautions to protect Earth’s biosphere in case it does.”

The video below shows a 2010 test of Curiosity conducted in a clean room with personnel in protective garments.