Dan Dumbacher of NASA and John Strickland of the National Space Society are having an argument over the Space Launch System. Unfortunately, both gentlemen are missing the point when it comes to space transportation.

Lee Roop of The Huntsville Times has written about the dispute in an article with the rather ponderous title,
NASA defends Space Launch System against charge it ‘is draining the lifeblood’ of space program.

Dumbacher is Deputy Associate Administrator for Exploration Systems Development, played a key role in designing the Space Launch System, and, of course, wants to continue building it. Strickland believes “The US government should either decide to turn the SLS into a reusable HLV booster… or open a competitive bidding for a privately designed and built reusable HLV.”

Strickland’s objections to the current SLS program have some justification. The program is extremely expensive. The SLS booster and its Orion capsule are slated to cost over $20 billion to develop. Once developed, operating costs will be huge. Ironically, NASA retired the Space Shuttle (which failed to fulfill its original economic goals) in order to replace it with an even-more-expensive launch system. 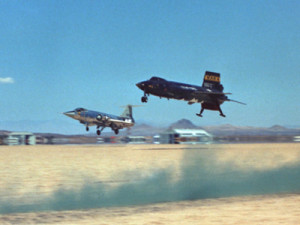 Contrary to popular belief, which Dumbacher seems to share, expendable launch systems are not cheaper to develop than reusable vehicles. In the 1960′s, General Dynamics did a study comparing the development of the suborbital X-15 with an expendable missile (Atlas A) of similar size and performance. General Dynamics found that the X-15, although more complex and of higher reliability, was about 30% cheaper to develop. A US Air Force study conducted around the same time, using different methods, came to a similar conclusion.

Even NASA’s Second Generation Reusable Launch Vehicle program, which Dumbacher managed, provides evidence for this. The 2GRLV was overdesigned and oversized for the market, but still, the estimated development cost (using traditional NASA development methods) was only around $5-6 billion — less than SLS or the Orion capsule.

This is not to say that NASA ought to build 2GRLV. If built, 2GRLV would fail to meet its cost goals for the same reason the Space Shuttle did. To achieve low operating costs, it is not enough for hardware to be reusable in theory. It must be reused in practice. Even if the Shuttle hadn’t run into technical problems and the design hadn’t been compromised by political meddling, it still would have failed economically because there weren’t enough large payloads to fill the mission model for which it was designed.

This has happened in aviation, also. The Hughes H-4 Hercules, better known as the “Spruce Goose”, was similarly oversized. Even if it hadn’t run into technical problems, the Spruce Goose would have been an economic disaster. The much smaller DC-3 was a better fit for the military and commercial markets at the time. Hughes apparently realized that, late in the development program, and so the aircraft never flew more than a single test flight.

A reusable launch vehicle will be economically viable, if and only if it is reused, frequently. Achieving such a high flight rate requires that the vehicle be sized appropriately for the market, as the DC-3 was in the 1930′s and 40′s, not oversized like the Shuttle or Spruce Goose. It must be sized for the payloads that can be commonly expected, not the largest payload imaginable. 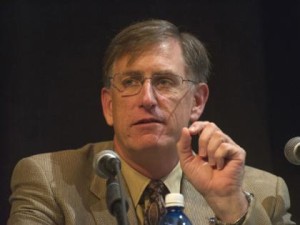 Both Dumbacher and Strickland take it on faith that NASA “needs” a super-heavy-lift launch vehicle, but faith is no substitute for sound engineering architectures. The late Max Hunter, father of the Delta rocket and the Delta Clipper Experimental (DC-X), liked to point out that the largest single payload which could not be broken down for shipping was only about 200 pounds (an adult human being). Recent architecture studies by Boeing and United Launch Alliance, among others, have shown that orbital propellent depots can replace super-heavy launchers in NASA’s exploration plans.

The use of in-space architectures such as propellent depots has a number of advantages. Not only would it reduce the overall cost, it would allow NASA to get started on its deep-space exploration plans more quickly (before politicians lose interest and decide to cancel the whole show). It would kickstart the development of an in-space infrastructure, which could serve a variety of scientific, commercial, and military missions in addition to NASA’s exploration program. Finally, it would open the door to the future use of extraterrestrial resources mined from the Moon, asteroids, or other objects.

NASA is historically prone to the mistake trying to build the biggest rocket possible, rather than a rocket that makes economic sense, because it is isolated from the financial disciple of the market. NASA depends for funding on politicians, a profession that is not generally known for its good financial sense. So, projects such as SLS are justified on the basis of how many jobs they create (i.e., how much money NASA manages to spend) in key Congressional districts, rather than the missions they can perform.

The only way out of this trap is to leave development of new space transportation systems to the private sector (just as we leave the development of air, sea, and land transport to the private sector). Strickland would probably agree with that, since he gives lip service to the idea of a “privately designed and built reusable HLV.” Unfortunately, he falls into the “new space” trap of calling government projects “private” or “commercial” just because the government slaps a “commercial” sticker on them.

Space-transportation visionary G. Harry Stine, quoting Robert Heinlein, said that an elephant is a mouse built to government specifications. Strickland wants the government to select a contract to build a “privately designed” elephant to government specifications. There is no reason to expect such a vehicle to be cheaper simply because the logos say “Boeing” or “Lockheed” instead of “NASA.” Since the owner/operator of such a system would have a government monopoly, they would have no incentive to bring cost down.

In the 1990′s, Congress passed the Launch Services Purchase Act, which required NASA to purchase future space-transportation services from the private sector, rather than developing its own launch systems. This law was later weakened, then ignored entirely. In the 1990′s, NASA justified the development of X-33, X-34, X-37, X-38, and 2GRLV on the basis that they were “experimental” systems and not covered by the LSPA. By 2004, when the White House announced the Bush Vision of Space Exploration, the law was simply ignored. “New space” activists (some of whom, ironically, had once lobbied for the LSPA) were so eager for NASA to return to the Moon that they turned a blind eye to the gutting of commercial provisions. But almost 10 years later, NASA is no closer to the Moon than it was in 2004.

Except as otherwise provided in this section, the Federal Government shall acquire space transportation services from United States commercial providers whenever such services are required in the course of its activities. To the maximum extent practicable, the Federal Government shall plan missions to accommodate the space transportation services capabilities of United States commercial providers.

The exceptions to this requirement are strictly defined:

The Federal Government shall not be required to acquire space transportation services under subsection (a) if, on a case-by-case basis, the Administrator or, in the case of a national security issue, the Secretary of the Air Force, determines that —

(1) a payload requires the unique capabilities of the space shuttle;

(3) the use of space transportation services from United States commercial providers poses an unacceptable risk of loss of a unique scientific opportunity;

(4) the use of space transportation services from United States commercial providers is inconsistent with national security objectives;

(5) the use of space transportation services from United States commercial providers is inconsistent with international agreements for international collaborative efforts relating to science and technology;

(6) it is more cost effective to transport a payload in conjunction with a test or demonstration of a space transportation vehicle owned by the Federal Government; or

(7) a payload can make use of the available cargo space on a space shuttle mission as a secondary payload, and such payload is con- sistent with the requirements of research, de- velopment, demonstration, scientific, com- mercial, and educational programs authorized by the Administrator.

In fact, even earlier language, dating back to the Reagan Administration, remains on the books. 51 USC Sec. 50133, “Shuttle privatization,” states:

This language precedes the Obama Administration’s “Commercial Crew and Cargo Program” by more than 20 years. The Reagan Administration successfully privatized NASA’s expendable launch vehicles, resulting in the current commercial industry for unmanned satellite launches, but transferring human spaceflight to the private sector remains unfinished business. Based on the actions and statements of Congress-folk like Sen. Richard Shelby (R-AL) and Rep. Frank Wolf (R-VA), it appears that today’s GOP no longer believes in private enterprise and seeks to expand government’s role in space transportation (regardless of its implications for the Federal budget).

What cannot continue will not continue, however. The Apollo-style, centrally planned space program advocated by both Dumbacher and Strickland is no longer sustainable. Indeed, it hasn’t been sustainable for the last 40 years, which is why NASA has not been back to the Moon. NASA needs to make radical changes if it is to survive. (Just following these laws that are already on the books would go a long way, however.) Currently, there is no indication that politicians are going to allow that.

– By Edward Wright. This article is reprinted with permission of the author. It originally appeared on Citizens in Space.

Opinions expressed are those of the author and do not necessarily reflect the views of Space Safety Magazine or its sponsors.