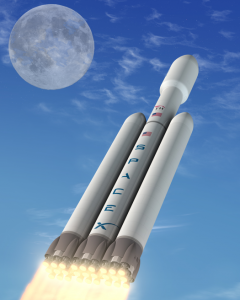 There have been occasional suggestions that NASA should scrap its Space Launch System (SLS) in favor of SpaceX’s Falcon Heavy for fulfilling its beyond low-Earth orbit space exploration needs [1]. The claim forwarded by some is that the as-yet-untested-and-unflown 53 mt low-Earth orbit (LEO) (200 km @ 28°) Falcon Heavy is now “cheaper” than the as-yet-untested-and-unflown SLS. Furthermore, canceling the SLS would supposedly save NASA $10 billion—money that could otherwise be used to fund such programs as the Commercial Crew integrated Capability (CCiCap), to conduct a flight test of Orion on a Falcon Heavy, and to focus on building a small-scale space station in the area near the Moon. One issue not addressed by proponents of canceling SLS is whether it is a good idea to couple a nation’s human exploration spaceflight capabilities to a private company. An issue which appears to be altogether ignored, is the Falcon Heavy’s small lunar payload capability and the impact this would have on an already complex and risky endeavor such as lunar exploration.

According to SpaceX, the Falcon 9 Heavy, also called the Falcon Heavy, will have a 53 mt (metric ton) payload capacity to LEO of 200 km with an inclination of 28° [2]. Such a LEO payload capability will be impressive, allowing SpaceX to launch nearly twice the payload of a Delta IV Heavy or an Atlas V, and to do so more cheaply than either. But when it comes to launching payload to a geostationary transfer orbit (GTO) or beyond, the Falcon 9 Heavy falls far short of either the Delta or Atlas launchers. With a GTO payload of barely over 12 mt, the Falcon 9 Heavy is at least 1 metric ton, or 1,000 kg, under what either the Delta IV Heavy or Atlas V can deliver to the same point in space.*

The Falcon 9 Heavy’s GTO payload deficiency relative to the existing EELV launch vehicles has other down-stream effects as to its appropriateness for beyond-Earth orbit (BEO) crewed exploration. It is safe to assume that the Falcon Heavy’s low-lunar orbit (LLO) payload capacity will not top much above 10 mt [3]. How will the Falcon 9 Heavy’s meager LLO payload capacity enable a meaningful return to the Moon? And why even talk about the Falcon Heavy as a possible launcher of crewed lunar exploration when each of the Delta IV Heavy and Atlas V launchers can send over 1,000 kg more than the Falcon Heavy to the Moon? Moreover, while the Delta IV and Atlas V have extensive flight histories, the Falcon Heavy has no such experience. 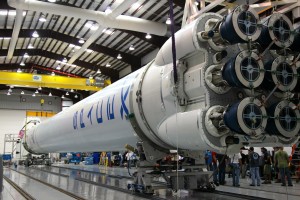 The Falcon 9 Heavy is, much like United Launch Alliance’s Delta IV Heavy, a triple-bodied version of the company’s Falcon 9 launch vehicle (Credits: SpaceX).

– Below, a SpaceX promotional video for the Falcon Heavy.

Falcon Heavy To The Moon 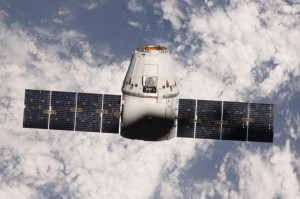 While supporters of an all-commercial approach frequently tout the company’s laudable accomplishments, they just as frequently ignore the limitations of both the Falcon Heavy launch vehicle and the Dragon spacecraft (Credits: SpaceX).

One problem with a non-HLV approach to lunar exploration is that if a replacement Falcon Heavy and payload are not handy, any launch failure could very well mean a scrubbed mission. So a non-HLV approach necessarily means an inventory of not just a spare Falcon Heavy, but of duplicate spaceflight hardware—or designing hardware and refueling stations such that a delay of weeks or months would have only a marginal impact on the mission. Solving all of these unknown-unknowns (or unk-unks in engineering speak) associated with multiple launches, assembling a mission in LEO, in-space refueling at an orbiting location, among others flowing from a non-HLV approach to beyond-Earth exploration, could see the cost advantage of using the relatively unproven Falcon Heavy largely, if not completely, evaporate.

A beyond-Earth exploration program using the Falcon Heavy in an HLV architecture has its own downsides and associated costs. In order to enable the Falcon 9 Heavy to be a capable beyond low-Earth orbit launcher, funds will certainly be needed to create a new cryogenic second-stage. This will be needed because, in its current configuration, a Falcon 9 Heavy could not even launch one 11.6 mt Unity node module, much less a 20 mt Bigelow BA 330 Nautilus module. Even with a brand new second-stage, reliance upon the Falcon 9 Heavy to build, visit, and maintain a lunar orbiting outpost will dictate doing so in very small chunks; the number of launches will then begin to add-up, as will the complexity, risk, and cost. A Falcon Heavy cannot place an Orion spacecraft even in high-Earth, much less lunar, orbit. So reliance upon the Falcon 9 Heavy for beyond low-Earth missions in an HLV-based lunar mission architecture would only set NASA up to cancel Orion and go with Dragon for our nation’s crewed space exploration needs.

The Dragon Spacecraft And Lunar Exploration

While it may be true that the Dragon spacecraft has a heatshield capable of allowing the spacecraft safe reentry into the Earth’s atmosphere, little else of Dragon is crew, much less lunar mission, capable. SpaceX’s Dragon is currently a participant in NASA’s commercial crew and cargo programs. One goal of NASA’s commercial crew program is to enable spacecraft built and operated by commercial space companies to get crews to and from the International Space Station by late 2017. But the requirements for a crewed spacecraft tailored for low-Earth orbit are different than those for beyond-Earth orbit. For one, a LEO capable spacecraft need only be capable of hours of operation, where a lunar spacecraft needs a capability of days. This means that the use of the Falcon Heavy as a means to returning humans to the Moon very likely means funding further enhancements, and verifying those enhancements to the Dragon spacecraft. As with over 90 percent of the funding for Falcon 9 and Dragon, this additional financial burden would fall upon NASA’s, and therefore the U.S. taxpayer’s, shoulders. Even with an enhanced Falcon Heavy launcher and Dragon spacecraft, more than one Falcon Heavy launch would still be needed to support a crewed lunar landing mission. Several Falcon Heavy launches would be needed to build a lunar orbiting outpost.

– In the video below, a documentary about NASA SLS.

Advantages Of SLS Over Falcon 9 Heavy 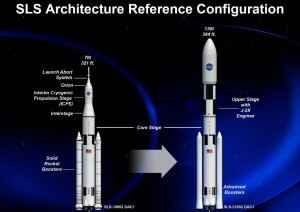 As it currently stands, neither NASA’s Space Launch System nor SpaceX’s Falcon Heavy have a proven track record. However, it would take multiple launches to accomplish what SLS could in a single flight (Credits: NASA).

NASA could send a crewed lunar mission or build a lunar outpost with far fewer SLS launches. That’s because the very first iteration of the SLS, the Block I, will carry twice the payload of a Falcon Heavy to the Moon. The SLS Block II will have a lunar payload capacity nearly 3–4 times that of the Falcon Heavy, depending upon what engines are selected for the SLS’s advanced booster.

Beyond the SLS’s substantial payload advantage for lunar missions, the question of cost remains. Are 3 or 4 Falcon Heavy launches really cheaper than just one SLS Block II launch? That is a hard question to answer given that both launchers are still effectively “paper” rockets. In factoring launch costs, there is the cost of the launch vehicle, the launch pad, launch support, and post-launch management, just to name a few.

The bigger problem for those wishing to end the Space Launch System program is that it is currently ahead of schedule. According to John Elbon, Boeing VP & General Manager, Space Exploration, “We’re on budget, ahead of schedule. There’s incredible progress going on with that rocket” [5]. Canceling a rocket that is ahead of schedule would be difficult at best. Given that Congress has, over three votes, not only supported SLS but increased its funding over amounts sought by the Obama Administration, the odds of opponents getting SLS canceled are slim-to-none. 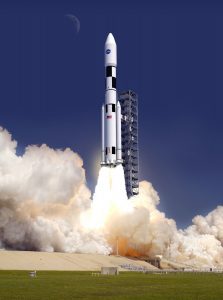 NASA’s SLS has the full support, to include funding, of Congress. As such, efforts to cancel the system in lieu of one that favors the company that SpaceX supporters approve of is not likely to occur. (Credits: NASA).

Space Launch System opponents suggest that the SLS program should cancel until a mission requiring such a rocket is identified. John Shannon, also with Boeing, recently stated, “This ‘SLS doesn’t have a mission’ is a smokescreen that’s been put out there by people who would like to see that [program’s] budget go to their own pet projects. SLS is every mission beyond low Earth orbit. The fact that NASA has not picked one single mission is kind of irrelevant” [6]. It bears mentioning that a good part of the reason there is no meaningful mission for the Orion-SLS is because the Obama Administration has not agreed with Congress that, as Congress noted in its 2010 NASA Authorization Act, cislunar space is the next step in our efforts beyond Earth and that the SLS is an integral part of that step.

Moreover, both short- and long-term missions for SLS have emerged in recent months. Within the 2014 FY Budget Proposal Request, NASA was directed to retrieve an asteroid, place it in lunar orbit, and then send astronauts to study it. The vehicle of choice is SLS. During a recent interview, NASA Deputy Associate Administrator for Exploration Systems in the Human Exploration and Operations Mission Directorate Dan Dumbacher stated on AmericaSpace that the long-term mission for SLS was to send astronauts to Mars.

*Editor’s note: these values appear to have been accurate at the time this article was published. As our astute readers have pointed out, SpaceX’s currently published nominal GTO payload capacity of the Falcon Heavy is 21,200 kg, which naturally impacts this analysis.