For 30 years Liberty Star, a sea ship owned by NASA, served the Space Shuttle program. It retrieved the spent solid rocket boosters after their splashdown in the Atlantic Ocean and tugged the space shuttle external fuel tanks from their assembly facility in New Orleans to the Kennedy Space Centre in Florida. 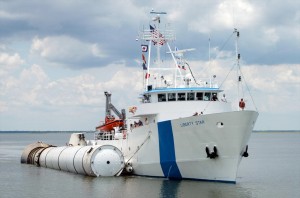 After 30 years serving the Space Shuttle program, Liberty Star is moving on towards a new mission (Credits: NASA).

At the end of August, NASA signed a memorandum of understanding transferring the ship to the U.S. Transportation Department’s Maritime Administration. In the middle of September, it will be included into the National Defense Reserve Fleet and used for training at the U.S. Merchant Marine Academy at Kings Point. Robert Lightfoot, a NASA associate administrator commented on this event in a statement: “Liberty Star served NASA well during the space shuttle program,” he said. “We know it will greatly benefit the Kings Point midshipmen, and we’re proud that Liberty Star will continue to serve the United States with distinction.” 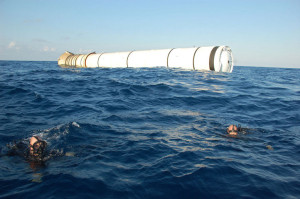 Since the Space Shuttle program ended, NASA hasn’t had much use for the Liberty Star and its twin ship Freedom Star (Credits: NASA).

As the Space Shuttle program was successfully concluded in July 2011 by the last Space Shuttle Discovery flight, NASA hasn’t had much use for Liberty Star and its twin ship Freedom Star since. Liberty Star, equipped by modern dynamic positioning system and advanced towing mechanisms, assisted at the recovery tests for the new NASA’s Orion crew capsule and supported the Crew Module Recovery Attach Fitting Test. Occasionally, it also served the research operations of the National Oceanic and Atmospheric Administration.

The last big event supported by Liberty Star was the May 22 launch of the first private spacecraft towards the ISS. During the event, Liberty Star used an onboard diagnostic radar system to track the flight of the boosters when the Falcon 9 rocket with the Dragon capsule aboard took off towards the International Space Station.

The new mission of Liberty Star is to serve education and training of the students at the Merchant Maritime Academy. Its advanced equipment will bring a new dimension to the midshipmen training as it closely resembles what the graduates will meet after entering the maritime work force.

You can watch Liberty Star in action in the following video:
[youtube http://www.youtube.com/watch?v=Gbtulv0mnlU]