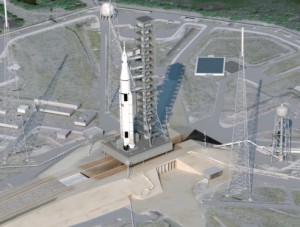 Boeing has proposed an Exploration Gateway Platform architecture that will combine NASA’s Space Launch System (SLS) and a reusable Lunar Lander within a central exploration plan to take man back to the surface of the moon, while also paving the way for a potential manned mission to Mars.

“A Gateway at [Earth-Moon Lagrange] EML point 1 or 2 allows re-usability of the lunar Lander which saves money and enhances development of the ultra-reliable systems needed for Mars,” Boeing’s officials noted at the presentation. “A propellant depot at the Earth-Moon L1 point would significantly improve lunar and deep space exploration mission operations by providing an infrastructure capability for deep space transportation and by opening up participation to international partners and commercial vehicles. This propellant depot outside of Earth gravity well would act as a refueling station for spacecraft on the way to the lunar surface or Mars,” continued the presentation.

This Moon Mission Concept was presented by Boeing at the Global Exploration Workshop in November, sparking discussions but also disagreements. According to the Global Exploration Roadmap, there is a priority in “Near term focus on guiding capabilities, technologies and leveraging ISS,” before expanding to “Long term focus (on) discovery driven – and enhanced by – emerging technologies”. Some feel that the Boeing plan is focusing on long term to the detriment of short term development. 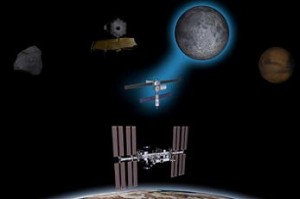 Orion’s two first missions with the SLS are lunar flights, the first scheduled to launch in 2017, followed by a crewed mission in 2021, marking the first human venture out of Low Earth Orbit (LEO) in decades. The current NASA plan calls for a Near Earth Object (NEO) mission in the 2020’s before attempting a manned mission to Mars in the 2030’s.

Boeing’s proposal expands on the lunar stage of this plan. Instead of just performing a lunar fly-by, Boeing suggests a crewed mission to the moon. This mission would occur after the creation of an enabling Gateway located at EML1 or EML2. The Gateway would serve as the host station for a reusable Lunar Lander, launched by the SLS Heavy Lift Launch Vehicle (HLV). It would be constructed at the ISS, using the Node 4/DHS (Docking Hub System), an orbiter external airlock, an MPLM (Multi-Purpose Logistics Module) habitat module, and an international module.

The preliminary design of the scenario consists of:

The DCSS would then stop at Gateway to refuel before continuing to the moon. After the lunar landing the crew would return to the Gateway Platform to board the berthed Orion for the return to Earth.

Apart from providing a baseline for crewed missions to Mars and launching lunar habitats, the main benefit of this proposal is saving the billions of dollars that recurring missions would cost. “The goal for recurring operations should be to deliver the crew and all fuel for the Lander in a single SLS launch,” stated Boeing in their proposal. “The expensive crew cabin and ascent stages are reused for multiple missions saving billions of dollars.”

In the video below, you can see an animation of the NASA Space Launch System, designed to carry the Orion Multi-Purpose Crew Vehicle (Credits: NASA).
[youtube http://www.youtube.com/watch?v=IDQpFAUKgvI]