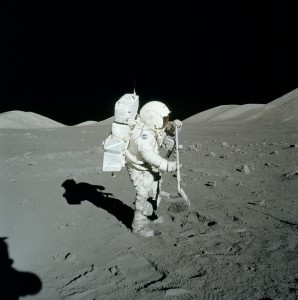 Golden Spike Company, a space startup from Colorado, is looking to get humans back to the moon by 2020, using existing or underdeveloped technologies to begin what could be called a commercial lunar campaign. Although this plan has so far been circulating unofficially, the company is expected to make a formal announcement in December 2012.

According to NASA Spaceflight, a non-NASA affiliated group that was the first to release the information, “the effort is led by a group of high profile individuals from the aerospace industry and backed by some big money and foreign investors.”

NASA Spaceflight’s sources indicate that only US vehicles will be used in the initiative. Spacecraft could be assembled in low Earth orbit (LEO) following multiple launches. Propellant depots and fuel transfer technology may be involved. There is also a plan to park elements – including a lunar lander that is already under development – in orbit around the moon. Such elements could be used by commercial astronauts to reach the lunar surface. Long-term projects even include a commercial man-tended outpost made of inflatable modules.

The name Golden Spike is part of American history and refers to a ceremonial final spike driven by Leland Stanford to join the Central Pacific and Union Pacific railroads on May 10, 1869 in Utah, and thereby completing America’s first transcontinental railroad. Based on this idea, Golden Spike Company would develop a reliable “Cislunar Superhighway” between the Earth and the Moon. Although not much is known about the company, it was registered in Colorado by former NASA science chief S. Alan Stern.