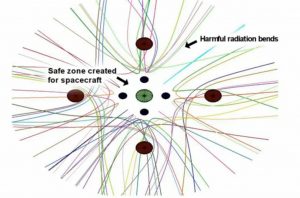 Spacecraft intended to carry a crew in orbit require shielding to protect their inhabitants from harmful radiation. This is usually accomplished by physically blocking energetic particles, for instance with sheets of aluminum. In order to make the shield more effective, the thickness of the aluminum is increased.

One of the challenges with long duration and deep space missions is that the amount of radiation exposure quickly increases beyond accepted lifetime limits for the astronauts onboard. Ram Tripathi of NASA’s Langley Research Center thinks he may have the solution to this problem. Under the NASA Innovative Advanced Concepts Program, Tripathi is developing a concept for active radiation shielding. Instead of the passive approach of placing enough mass between the bombarding particles and personnel to diffuse radiation to acceptable levels, Tripathi proposes to use electrostatic charges to direct the energetic particles to follow a designed path, thereby avoiding the spacecraft altogether.