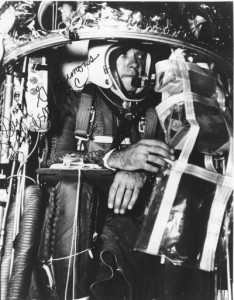 How would cosmic radiation affect future astronauts when they rocketed into space? Dr. David Simons, from Holloman Air Force Base, set out to determine that by sending rats and monkeys aloft in balloons.

“Now that men are flying in regions beyond 70,000 feet – where cosmic radiation storms through the skies unhindered – the Air Force felt it was necessary to send aloft its crews of space rats to inspect the situation at first hand,” said “Men, Rockets and Space Rats” (Julian Messner, 1955). “It is obvious that no one can determine the effects of cosmic rays on living cells or tissues without subjecting some of those cells and tissues to radiation.”

The animals flew from Holloman’s Balloon Branch. Simons, who was Space Biology Branch chief of staff at the Air Development Center, reported on the results to the Aero Medical Associations 26th annual meeting in Washington. The Associated Press, in its coverage, said tissues did not seem to be negatively affected. The story, which the Alamogordo Daily News published on March 22, 1955, said “mice, exposed for 30 hours, showed no other apparent effects” other than that experienced by the black-haired mice, which was “a significant greying of hair.” Balloons had lifted these rodents to 90,000 feet altitude.

There were concerns beyond physical degradation and suffering. Would cosmic rays also degrade mental capabilities? To find out, Simons said “two monkeys (were) exposed a total of 60 hours on two separate ascensions, 30 hours each time.” Afterward, the primates “appeared to have the same learning ability with no adverse effect.”

The United States had been launching animals, including mice and fruit flies, into Earth’s upper atmosphere in 1947. Initially, they rode the German V-2, and the Aerobee sounding rocket. Rodents and flies reproduce prodigiously in a short span of time, allowing scientists to discern genetic changes that radiation might create.

Military-launched monkeys were monitored “for six months,” said the ADN, in a story published on Aug. 24, 1955. Researchers concluded “tentatively that cosmic particles may have been over-estimated as hazards to travelers in the upper space regions.”

“‘By the time man flies into higher altitudes, he will know what to expect and will be better prepared for it as a result of … experiments conducted at Holloman,’” the ADN quoted an unnamed Holloman Air Development Center official. 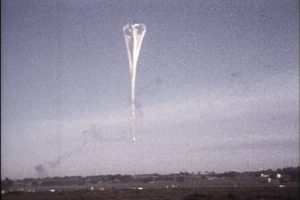 Rats rode aboard Moby Dick balloons, a project that began in 1951, which Simons oversaw. Named for Herman Melville’s novel, not just any rat got to hop aboard. “Men, Rockets and Space Rats described the selection process thusly: “(Simons) is carefully choosing his ‘crew’ for the trip, examining (the rats) to determine their exact physical status as they squirm in his hand and sometimes try to bite him. This is the most important part of the whole operation – for without a crew, there would be no purpose to launching Moby Dick. And unless the crew is in perfect health at takeoff there would be no sure way to determine the effects of cosmic radiation later.”

On Aug. 19, 1957, Simons sent up another guinea pig of sorts – himself. A graduate “with honors from the Jefferson Medical College in Philadelphia,” according to the website dgs.eu.com, he ascended to 102,000 feet altitude. For 32 hours his home was a very cramped gondola attached to a Project Man High balloon. When Simons touched down the next day, not only had he investigated “the physical and biophysical conditions of the extreme upper atmosphere,” he’d also “set a new world’s altitude record with a manned balloon,” said “Animal Astronauts: They Opened the Way to the Stars” (Prentice Hall, 1961). Radiation he encountered apparently had no detrimental consequence; he was 87 when he died in 2010.

Armed with the knowledge gained over the previous decade, Holloman, in 1958, began “training chimpanzees for space flight.” Researchers sought to learn whether a sentient being could perform tasks in weightlessness. Some scientists believed the brain would cease to function in such a condition.

“Before man flies out into orbital space and comes back alive, one of our chimps will have to do it first,” “Animal Astronauts” quoted biologist Lt. William Ward.

While numerous chimps were trained, HAM, an acronym for Holloman Aero Medical, followed by Enos, made the flights. “Veterinarians and psychologists reported that Ham suffered no adverse after effects from his pioneering ride,” “Animal Astronauts” said. “The way to the stars had been opened up for man.”

Michael Shinabery is an education specialist and Humanities Scholar with the New Mexico Museum of Space History. E-mail him at michael.shinabery [at] state.nm.us.