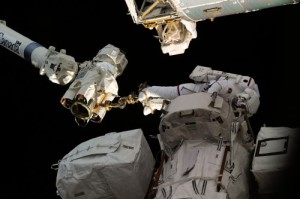 Should an EVA become necessary, it may bear close similarities to the three spacewalks performed by Doug Wheelock (pictured) and Tracy Caldwell-Dyson in August 2010 (Credits: NAS).

The six-man Expedition 38 crew continued with a full plate of work aboard the International Space Station (ISS) Thursday, despite yesterday’s malfunction of one of two external ammonia coolant loops. The pump module on one of the loops automatically shut down when it reached pre-set temperature limits. According to a NASA update, the flight control teams are currently working to get the loop back up and running, with suspicion centering on the improper functionality of a regulating flow control valve inside the pump module as one possible root cause. Speaking earlier today, ISS Mission Operations Integration Manager Kenny Todd explained that investigatory work will continue through the weekend, but did not rule out a potential EVA to replace the pump module.

The current situation has drawn some parallels with the August 2010 failure in the starboard loop, which left the space station with barely half of its normal cooling capability and severely restricted the redundancy of several systems. In particular, two of the four Control Moment Gyroscopes were shut down and three EVAs were executed by U.S. astronauts Doug Wheelock and Tracy Caldwell-Dyson to remove the failed pump module and restore the starboard loop to its proper functionality. “When we talk about it in terms of the pump module, it’s going to sound the same to everybody,” explained Todd earlier today (Thursday). “In that particular instance, we had a pump that just shut down. If you look inside a pump module itself, there are several different components. In this instance, the problem we’re having is with the flow control valve. While it’s in the same housing, it’s a separate piece of hardware and has a different controller. Back in 2010 the pump failed and that was a failure to move the ammonia. What we’re having here is a failure to control the temperature of the ammonia.” 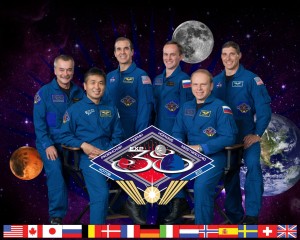 By regulating the temperature of ammonia in the coolant loop, the flow control valve ensures that when it is re-introduced into the heat exchanger of the station’s Harmony node, it does not freeze the water also passing through the exchanger. NASA has stressed that the Expedition 38 crew—which consists of Russian cosmonauts Oleg Kotov, Sergei Ryazansky and Mikhail Tyurin, U.S. astronauts Mike Hopkins and Rick Mastracchio and Japan’s Koichi Wakata—are in no danger, but added that teams did work to move certain critical station systems over the second coolant loop. Some non-critical elements have been powered down inside Harmony, as well as Japan’s Kibo and Europe’s Columbus laboratory modules, until such time as the problem is resolved.

With Orbital Sciences Corp.—one of NASA’s two Commercial Resupply Services (CRS) partners—scheduled to launch its first dedicated Cygnus cargo ship (ORB-1) toward the ISS on Wednesday, 18 December, Todd revealed that he had deferred his decision on whether or not to proceed or postpone the flight until more is known about the flow control valve issue. “I deferred to Go-No Go for that particular launch, until we get a little more information on this particular issue,” he said. “There are some issues with redundancy right now, that when you get into a situation where you need to bring up another visiting vehicle, you want to make sure that you’re in the best possible position. For that reason, we have Launch Commit Criteria and that criteria is in place to ensure that the system are at the right level of redundancy and operating properly. Based on that criteria, there are a few of those commit criteria that we cannot meet.”

Todd added that the available “window” to launch ORB-1 might stretch out to 21 or even 22 December and explained that there was “no harm” in extending the Go-No Go decision to launch the mission. On its ORB-1 updates page, Orbital announced today that it is “awaiting word from NASA on whether there will be a schedule impact” and that “We expect to receive direction from NASA on how to proceed no later than Monday, 16 December”. 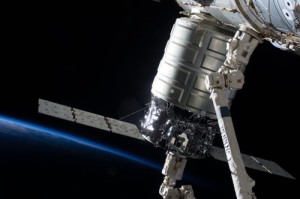 Todd plans to reconvene the Mission Management Team on Monday, by which time he anticipates the results of various fault trees will have produced a forward plan on how to proceed. However, Todd did not rule out the possibility of a contingency spacewalk—not unlike the unscheduled EVA performed by Expedition 35 astronauts Chris Cassidy and Tom Marshburn on 11 May 2013—whose objectives might include the removal and replacement of the entire pump module. “There’s no issue with having the hardware to go do it,” said Todd, in reference to the fact that a spare pump module is aboard the station. The choreography would be similar to that of the August 2010 spacewalks by Wheelock and Caldwell-Dyson. Although a spacewalk is by no means the only solution, it seems a strong possibility and former NASA astronaut Jose Hernandez tweeted earlier today that “I see an unscheduled spacewalk in the future.”

For now, the ISS is described as being in a stable configuration and the six-man crew is safe and supported a full day Thursday of science and maintenance work. “The science and research mission continues aboard the station,” a NASA release explained, “and the science data collected so far is not at risk.” Mike Hopkins—who has been aboard the station with Kotov and Ryazansky since 25 September—spent time on the advanced Resistive Exercise Device (aRED) and worked in the Quest airlock to install a jumper for contingency power to the secondary shell heaters and prepared the U.S. space suits for some scheduled upcoming maintenance. Meanwhile, Rick Mastracchio deployed eight bubble detectors for the RaDI-N neutral radiation experiment and Koichi Wakata removed and stowed a NanoRacks platform. Both Mastracchio and Wakata arrived at the ISS with Mikhail Tyurin on 7 November.

Elsewhere, on the station’s Russian segment, Oleg Kotov, who commands Expedition 38, focused on the unloading of the Progress M-21M cargo ship, which arrived at the ISS late last month, whilst his crewmates Tyurin and Sergei Ryazansky worked on maintenance and replacement of life-support equipment in the Zvezda module. Yesterday (Wednesday), Progress M-21M also executed its first of two planned “re-boost” maneuvers to increase the station’s orbit and establish the proper phasing and trajectory for visiting Russian vehicles in 2014. The Progress’ engines were fired for 7 minutes and 41 seconds and established the ISS in the optimum position for Orbital Sciences’ ORB-1 Cygnus craft, whose target 18 December launch should bring it for a rendezvous and berthing at the “nadir” (or Earth-facing) port of the Harmony node on 21 December.