For Dick Covey, the pilot of Mission 51I, the instant that Space Shuttle Discovery broke the shackles of Earth on the cusp of daybreak on 27 August 1985 had been a long time coming. In fact, he was the last of his 35-strong astronaut class, chosen seven years earlier, to reach space. “I got that distinction,” he told the NASA oral historian, “and that was hard to take.” At the time of his assignment to Mission 51I in November 1983, Covey knew that he would not fly until at least the end of the following year. “At the time, I didn’t realise I was going to be the very last one,” he said, “but I knew I was going to be somewhere down there.”

For Discovery’s astronauts, their first day in orbit turned out to be particularly busy, because they were the first shuttle mission to perform two satellite deployments in those first few hours in orbit. Originally, the first satellite, the American Satellite Company’s ASC-1, was to be deployed nine and a half hours after launch, followed by Australia’s Aussat-1 exactly a day into the mission and Leasat-4 early on 29 August.

However, a little more than two hours after launch, Aussat’s Pacman-like sunshield was commanded open to perform routine health checks … and the port-side clamshell door only partially unfurled. “It was believed,” read NASA’s post-flight mission report for 51I, “that the clamshell structure had been deformed and was believed to be binding on the omni antenna bracket, located on the top of the Aussat.” Mission Specialist Mike Lounge would later blame himself, and a last-minute change to the flight plan, for how this deformation to the sunshield happened. A couple of weeks before launch, he had been assigned the task to activate a payload bay camera to inspect the sunshield. “I did that,” he explained, “then I commanded the sunshield open and I had failed to stow the camera. If it had been Day Two, instead of Day One, I would have been more aware of it. On Day One, you’re just kind of overwhelmed and you’re just down doing the steps … but that was an example of why you don’t change things at the last minute and why you don’t do things you haven’t simulated—because we’d never simulated that.” 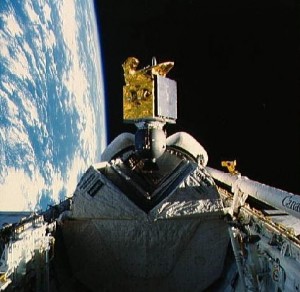 The American Satellite Company’s ASC-1 communications satellite spins out of Discovery’s payload bay, early in the 51I mission. Note the Pacman-like jaws of the satellite’s protective sunshield (Credits: NASA).

The crew was advised to uncradle the Remote Manipulator System (RMS) and push the sunshield door open, but unfortunately the Canadian-built mechanical arm was suffering its own problems: a failure of its elbow joint meant that Lounge had to command it in a “single-joint” mode. “Instead of some co-ordinated motion,” he said, it was “a little awkward and took a while.” Commander Joe Engle remembered Lounge having the incredibly difficult and intricate job of manually operating electrical switches, selecting each RMS joint in turn, then moving them one at a time to position the arm correctly. “That became a concern,” Engle reflected in his NASA oral history, “as to how much that was going to slow us down in the grapple and the capture and then the redeployment of the failed [Leasat] that we were going to go repair.”

The RMS was uncradled from the port-side sill and, at 11:15 a.m. EDT, Lounge successfully pushed Aussat’s clamshell door fully open. Due to fears of imposing excessive thermal stress on both Aussat and its attached booster, NASA decided not to wait until Day Two to deploy it. Under the supervision of Mission Specialist Bill Fisher, Aussat-1 was duly released at 1:33 p.m. EDT on the descending node of Discovery’s fifth orbit, whilst ASC-1’s deployment was delayed by a couple of hours from the seventh to the eighth orbit. It was sent spinning out of the payload bay by Lounge at 6:07 p.m. “We scrambled to get that done,” remembered Dick Covey, “so we could get that one that didn’t have the protection done, plus the one that we had already planned on. It made for a very, very busy first day for a bunch of new guys up there!” The third payload, Leasat-4, was deployed under the supervision of Mission Specialist James “Ox” van Hoften at 6:48 a.m. EDT on 29 August.

Unlike its ill-fated predecessor, Leasat-3, launched in April 1985, the omni-directional antenna unfolded without incident, the spacecraft spun-up without incident, and its integral perigee kick motor ignited without incident, transferring it perfectly into geosynchronous orbit. Testing got underway on 4 September, but trouble was in store, for Leasat-4 suffered a failure of a transmission cable between its UHF multiplexer and transmitter and ground controllers lost contact with it. Nothing could be done to save it, since it was far beyond the reach of even the shuttle.

When Dick Covey was named to fly at Joe Engle’s side on 51I, it was an excitement and an honour, for Engle’s experience spanned several decades and encompassed not only the shuttle, but the Apollo lunar module and the X-15. More than that, however, he was delighted when Engle assigned the rookie the task of performing the rendezvous with the failed Leasat-3. This was completed in spectacular fashion on 31 August. Early in training, they agreed that Covey would perform the “phasing” manoeuvres and precise Reaction Control System (RCS) thruster firings to approach to about 1,000 feet, whereupon Engle would take over and manoeuvre to position the fully-suited van Hoften, his feet secured in a restraint on the end of the RMS, close enough to the satellite to manually grapple it. “When he had completed the rendezvous manoeuvre and had stabilised,” said Engle, “I looked up and kind of expected to see [Leasat] somewhere in the field of view in the window, but he had flown that rendezvous and perfectly nailed it, so the satellite was right … in the center of the [crosshairs].” 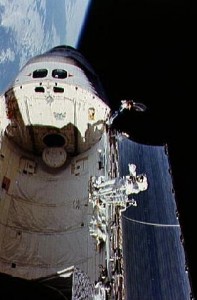 In addition to serving as the primary RMS operator, Mike Lounge was responsible for helping van Hoften and Fisher into their space suits and into the airlock. It was then time for him to head up to the flight deck, whilst the two spacewalkers ventured outside for an excursion that would last seven hours and 20 minutes. Van Hoften installed a foot restraint on the end of the arm and secured himself. By his own admission, the biggest challenge was that “I had to go literally up there and get hold of this thing, somehow, until we could get hold of it and get the arm on it, because I had to attach a [capture] bar to it … It was every bit as tricky as I thought it would be.” The massive Leasat, which weighed over 15,000 pounds, was rotating very slowly. He fell behind schedule when the capture bar refused to fit, but he persevered. The situation was hampered by a lack of continuous communication with Mission Control, since in 1985 the full network of Tracking and Data Relay Satellites had yet to be established, and Lounge found that the RMS difficulties meant he had to be very deliberate with each motion.

Eventually, after the installation of the capture bar, Lounge was able to manoeuvre van Hoften and Leasat toward fellow spacewalker Bill Fisher in the payload bay, who fitted a second “handling” mechanism. Van Hoften then attached an RMS grapple fixture. The two men safed the satellite with grounding plugs, then fitted a bypass cable harness to work around the faulty deploy switch. Leasat-3’s batteries had not frozen and the repair showed its first sign of success when the omni-directional antenna popped open. For Fisher, a physician with a background in emergency medicine, it represented something totally new: microsurgery on perhaps the biggest patient he had even worked upon.

Van Hoften has described his relationship with Fisher—an astronaut since May 1980 and the husband of Anna Fisher—as not nearly as good as George “Pinky” Nelson, with whom he had done two EVAs to repair Solar Max. “Bill’s very competent,” he admitted in his NASA oral history, “but he was obsessed with strength. He had gone out and done lots and lots of bodybuilding before we went on this. For some reason, he thought this was important in a spacewalk and I kept telling him that it wasn’t.” As Fisher built mass and muscle, van Hoften even worried that he might outgrow his finely-sized space suit.

The second EVA, which occurred on 1 September and lasted four and a half hours, involved the two men installing an instrumented cover over Leasat’s apogee kick motor nozzle and arming it. The enormous size of the satellite almost caused it to collide with the orbiter—the spacewalkers could not see each other from their positions on opposing sides of the payload bay—and van Hoften resolved that, “if something happens and I’m about to lose it,” he would give it “a heck of a push and bail out!” At length, they managed to control its motions and van Hoften manually spun it up to three revolutions per minute and released it. The satellite went on to perform its manoeuvres just as planned.

With the successful deployment of Leasat-3, the mission had effectively completed its objectives. From time to time, over the next day or so, the sounds of Willie Nelson echoed through Discovery, thanks to Mike Lounge’s penchant for country music. On 3 September the astronauts prepared for their return to Earth. Re-entry was mostly in darkness, as Discovery headed across the slumbering Pacific toward the California coastline and, further inland, deep in the Mojave Desert toward Edwards Air Force Base. 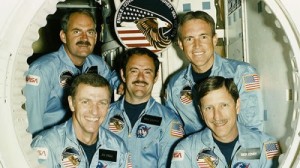 For Joe Engle (front left), James “Ox” van Hoften (back left), and Bill Fisher (back right), 51I would be their final space mission. For the other two crew members, Mike Lounge (center) and Dick Covey (front right), their next voyage together would be aboard Discovery’s very next flight … but after the destruction of Challenger, the shuttle as a vehicle would have changed beyond recognition (Credits: NASA).

From the flight engineer’s seat, Lounge took a handful of photographs of the dazzling plasma wake trailing behind the shuttle, and Dick Covey remembered that it “crawled,” like fiery fingers, along the bottom of his window. “Then, as you get into the thickest, hottest regions,” he continued, it turned “into this complete sheath of white over the windows.” Touchdown on Runway 23 at 6:16 a.m. PDT (9:16 a.m. EDT) concluded a mission of just over seven days. Rising from his seat, Lounge felt heavy—he could feel his weight and it required conscious effort to keep his head up—and he remembered that walking and taking corners was awkward, tentative even, at first. It did not last. Just as he had adapted to weightlessness, within a day Lounge was once more adapted to life on Earth.

Mission 51I had been spectacularly successful, but would represent the last shuttle spectacular of its kind in the pre-Challenger era. Only one other commercial satellite salvage operation would be performed, on the maiden voyage of Endeavour in May 1992, a mission which one senior NASA manager described harking back to “the good ol’ days.” Some observers have looked back on those days long ago as times of foolhardiness, in which a mistaken sense of being bulletproof prevailed and a protective hand of God forever sheltered the shuttle and her astronauts. Others have regarded them for what they were: a spectacular demonstration of human beings accomplishing tasks of profound complexity, against all the odds. Yet the loss of Challenger, just a few months after Mission 51I, provided a healthy dose of the reality that space exploration carried extreme risk. When Dick Covey and Mike Lounge next flew into orbit together, in September 1988, the “picnic” atmosphere of launch parties would be gone, friends would have been lost, a sense of innocence destroyed, and the shuttle would never be the same again.