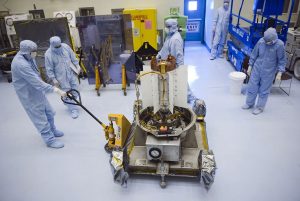 A NASA plan to reinitiate production of plutonium-238 (Pu-238) has been delayed once again due to lack of funding in the US Congress year-end funding bill for the Department of Energy (DoE) fiscal year 2012. This latest bill follows 3 months after a similar appropriation request for the DoE was denied. Domestic US Pu-238 supplies will not be available for at least five years after production is authorized.

Funding of the Pu-238 production, at $20 million, was originally supposed to be split evenly between NASA and the DoE. Hoever, Congress refused to authorize the DoE portion of the spending, indicating that the Pu-238 is really of use only to NASA and should not be funded by another agency. The DoE has traditionally controlled supply of Pu-238 to NASA.

Pu-238 is used in radioisotope thermoelectric generators (RTGs) to power deep space missions. The generators work by capturing the heat released from the Pu-238 isotope as it decays and converting that heat into electricity. RTGs are particularly critical for long duration deep space missions where solar power may be inadequate. In the United States, RTGs have been used to power spacecraft since the Apollo days. NASA’s recently launched Mars Science Laboratory Curiosity is powered by 4 kg of Pu-238.

Scientists advise that certain types of space missions are impossible without a radioisotope generator. Several accidents involving RTGs have occur on both US and Russian missions and two have resulted in release of radioactive material with one reaching land after the 1977 Cosmos-954 crash in northern Canada. In the NASA approval process, the DoE is responsible for preparing a radiological risk assessment for each RTG-powered mission.

The United States stopped producing Pu-238 in the 1980’s and has since been sourcing their plutonium from Russia. However, contract disputes and limited supplies have put even this source in danger. Astronomers at NASA and elsewhere have been warning for months that continued delay may force the postponement of proposed planetary space missions.

The video below explains how the Mars Science Laboratory’s RTG will be used: